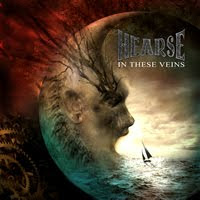 The fourth album from Sweden's Hearse is quite a study in contrasts, or rather, the lack of contrast. While it's a far harder rocking effort than its predecessor The Last Ordeal, it's also the band's least dynamic offering musically, sticking quite closely to the punk-fueled death & roll rhythms, though the melodic surging continues in small doses. Some would inevitably find this more to their liking than other Hearse albums, if only because it seems to jive better with the pure aesthetic of the genre that Entombed started with Wolverine Blues. In These Veins is not the finest hour for Johan Liiva and crew, but it's a solid block of rock that you could ignite while burning down any cosmic roadway and at least get the neck hammering away.

"House of Love" doesn't conjure up anything truly catchy, aside from maybe the male choir backups in the bridge, but it boils up a cauldron of high powered riffing that benefits from the same massive production standard as the previous album The Last Ordeal. "Corroding Armour" goes for broke with a big dragstrip stoner groove that surges into more of the band's effortless punk chords, with some brief transitions into death metal and hardcore rudder riffs that serve as the chorus. Again, not insanely catchy, nor is "Intoxication", which once again bludgeons forth with death punk attitude, this time even picking up through the bass breaks and counter vocal angst. "Naked Truth" sticks close to the tree, d-beating drive rhythms with some great vocal echoes and a pretty cool, eerie little break with the guitars wailing to offset the melodic death.

"Crusade" feels like the band's take on a more nostalgic strain of hard rock & heavy metal, but it retains the punk and squealing, cautionary leads of many of their other songs. It's quite catchy and one of the better songs on the album, followed by the blunt thrash-core of "Among the Forlorn", which also has some great little guitar harmonies and a decent thrash breakdown. "Atrocious Recoil" has the most memorable of the album's melodies, a simple line over a surge of jet-fueled death which wouldn't be out of place for Amon Amarth. After three albums, the band finally decided to include a namesake song, and "Hearse" is another of the more memorable trips on the record, with giant crashing chords and ballsy blues grooves. The title tracks leads us out, a punchy number with a shuffling gait in between a forgettable death line, but the best solo on the album by far.

As a whole, In These Veins is a little better than The Last Ordeal. But only a little...and it lacks the hooks to truly burn out your mind. The sound is still somewhere between Entombed's 3rd album and Liiva's work in Arch Enemy, and the mix is excellent, at most levels and in most CD players. Not the first album I'd recommend for a new listener, but if you enjoy Armageddon, Mon Amour or The Last Ordeal then it's a safe bet.