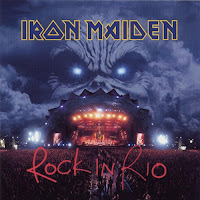 Iron Maiden's Rock in Rio was recorded in January 2001 at the Rock In Rio festival, Brazil. It could be considered the complementary live to the Brave New World album which featured the reunion of the band with Bruce Dickinson and Adrian Smith, and the inauguration of the band's three-guitar assault (since they kept on Janick Gers). But though it pays great heed to the band's more recent material, with features some unfortunate selections from the mediocre X Factor and downright awful Virtual XI, the album does mix it up with some older songs, and the sound quality is actually quite good. If you want yet another Maiden live set captured to audio, this 2CD set is far from the worst they've offered.

A great choir intro heralds "The Wicker Man", which is pretty much the best thing you could hope for to open their set, a sheer ass kicking with an unforgettable chorus that inspires both emotion and fist shaking. Judging by the massive crowd response (which honestly sent shivers up my spine), the Brazilians were WELL into this song by the time Maiden dropped down there for the festival. As they should be, because it rules, and it's one of the best on this entire live. Other tracks from Brave New World include "The Mercenary", "Ghost of the Navigator", "Blood Brothers", "Dream of Mirrors" and the title track, all of which the crowd can also relate to. The rest of the newish material is rounded out by "The Clansman" from Virtual XI, which, while improved with Dickinson's energy, is still little more than average. "Sign of the Cross" is included from The X Factor, not one of the better tracks from that album, and not one of the better tracks on this one.

The rest of the set list tours the band's already extensive back catalog, with some oldies from the Paul Di'anno days like "Wrathchild", "Sanctuary", and "Iron Maiden". "The Number of the Beast" "Run to the Hills" and "Hallowed be Thy Name" are surefire audience pleasers from The Number of the Beast album, and "The Trooper" appears from Piece of Mind. Only "2 Minutes to Midnight" arrives to represent Powerslave, and to my huge disappointment, there are no tracks present on this live from Somewhere in Time, which is my absolute favorite... Clearly Harris and crew underestimated the tastes of the Brazilian audience? The final two tracks included are "The Evil That Men Do" from Seventh Son of a Seventh Son, and the title track from Fear of the Dark. Like Somwhere in Time, No Prayers for the Dying is ignored, and it's a little sad.

Surely we could have given the boot to "Sign of the Cross" and "The Clansman" and included two or even three tracks from those neglected efforts. "Wasted Years", "Bring Your Daughter to the Slaughter" and any other track from Somewhere in Time would have sufficed. Alas, it was not to be, at least for the release of the 2CD set, but at least the rest sound really good, and outside the duo of Live After Death and Maiden Japan, this is one of the better live offerings. Each of the discs is also enhanced with video material, for a little extra bonus. If you're a Maiden fan who rabidly collects their live shows, at least the 'official' releases, you could do far worse than Rock in Rio.