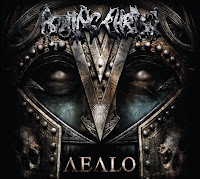 One of things I admire most about Greek black metal champions Rotting Christ is that, though they may have evolved at numerous points throughout their career, they never abandon the subtleties that have defined each stage. In listening through their 10th full length AEALO, one can hear equal parts Thy Mighty Contract, A Dead Poem and Sleep of the Angels, though most of the guitar work more closely resembles the mechanical, fast-paced immediacy of their more recent records Theogonia and Sanctus Diavolos. The band have spared no expensive this time to heighten the mood and atmosphere of their musical laments through the use of a traditional vocal choir and numerous guest vocalists, including Magus of Necromantia, Nemtheanga of Primordial, and even a recording of Diamanda Galas herself (on the band's cover of her "Orders from the Dead").

The title track "AEALO" strikes quickly through a forceful use of the choir over some faster paced, black riffing that fragments mid-stride into a flowing, majestic melody that would not have felt out of place on Triarchy of the Lost Lovers. The track is thoroughly captivating, though it always seems to hang you at some precipice where you expect some extremely glorious riff to arrive, and it never does. "Eon Aenaos" keeps the choir to a dull minimal which rings out along the verse and bridge riff, as the spritely guitars evoke national nostalgia for war-filled glades and one could easily close one's eyes and imagine oneself, as a bacchanae tearing at flesh in seductive rage. "Demonon Vrosis" is another track that recollects the Triarchy/Dead Poem years, with the added benefit of a female vocal that adds transient atmosphere. This was easily one of my favorites, ripe for replacement via the thunderous death groove that anchors the intro to "Noctis Era". I enjoyed the manly choir that subtly counterpoints some of the melodic chugging in the verse, and when the track opens up it's difficult to not grab a mug and start swinging it.

"Dub-sag-ta-ke" meshes traditional, flowing strings with a series of percussive guitars spoken through both mutes and chords, soon joined in the lush female chorals that so escalate the album's beauty. "Fire Death and Fear" feels similar, only with a focus on more bludgeoning, simplistic guitar mutes that are haunted by subtler choirs. "Nekron lahes..." is a brief vocal piece which leads the band into the drop hammering "...pir Threontai", with an excellent dual stream of razor melodes careening through the build in the drums and chugs towards an illustrious bridge movement. "Thou Art Lord" is amazing, making full use of various layers of vocals to craft a morose and powerful tribute seethed in regret. "Santa Muerte" is the wildest and grooviest of the tracks, but I didn't care for the chug so much. "Orders from the Dead" is given the Rotting injection, mainly through atmospheric guitars that hover below Galas' sick narrative, an interesting finale for the album. A collaboration between this band and this songstress seems such a natural fit, that I'm surprised it has taken this long for them to appear together, even in this form.

Rotting Christ have kept themselves relevant yet again, and I am personally excited to hear Greek bands like this and Kawir so loyal to the rich history of their land. Aealo will not be foreign to any fan of the band's prior work, but it carries with it a subtle re-invention due largely to the extensive use of the guest vocalists. This is not the best album in their catalog, and the band has not yet arrived at the level of 'black metal Plato' which we all know they could and should, but the songs are compelling and original enough to kill 50 minutes.