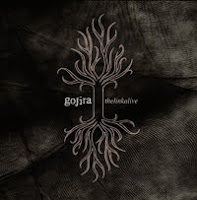 I will never for the life of me understand why a band with only two albums under its belt is releasing an official live recording, but I suppose if I looked back far enough into the past I might find some successful evidence that such an anomaly was possible. The Link Alive is the live audio recording which matches the previous year's DVD release, with the exact same track listing (only a 10 second difference on the opening instrumental track). Whether this is an earnest offering from the band or label I have no idea, but I do know that one is far better off spending his/her money on the DVD itself, which at least features videos and other material. This audio only version, The Link Alive, is a waste of time, and should have been included as a bonus to the DVD itself. But as it stands, it's only a very limited run release...for the truest of fans, so the band can be partially excused for its existence.

As far as the sound, well it sounds quite close to the band's first two studio albums, culling a fair amount of material from both. I doubt this is quite so hard, for though I love Mario's drumming, the music the band performs is extremely simplistic, and it would be a sad day if they could not pull it off as clean as possible in the live setting. The vocals are good and rough and loud here, but you can still make out all the thick bass and the ringing of the band's more pensive guitar riffing, circulating the chugging beast within. I can imagine that the mosh pits at a Gojira would be quite strange, I picture a bunch of strange Frenchmen in checkered pants and bunny costumes diving and decking one another to the violent jerking of the band's almost menstrual rhythms.

At any rate, this is a healthy cross-offering from the band's demos and earliest full-lengths. From Terra Incognita, you have "Clone", "Blow Me Away You (Niverse)", "Space Time", "Lizard Skin", "In the Forest", "Love", while The Link is represented with the title track, "Death of Me", "Connected", "Remembrance", "Indians", "Embrace the World", "Inward Movement", and the reconditioned demo track "Wisdom Comes." The one track I didn't recognize was the instrumental "Terra Incognita", but it's little more than a jammy set-up for "Indians" without much memorable to report.

The Link Alive is a vibrant enough recording that seems ample evidence of the band's ability to put on a tight performance, but I can't think of any reason I would track it down or choose any of these versions above their studio counterparts. Sure, the chugs are a little more pronounced, and you can hear a little less of the studio mechanism and a little crowd participation, but the songs I didn't care for before are no better in this setting and it's just another quickly forgotten exchange not worth the 75 minute investment when so much else vies for your attention.