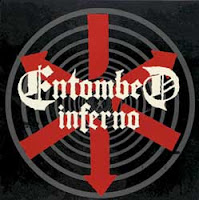 The 8th full-length from Entombed sees the band strike out on a plateau after their surprisingly great Morning Star. Inferno is a moody album which falls between that and Uprising. A grimy tone permeates this recording like a thick, toxic membrane, a riotous unrest ready to erupt at any second. The band brings back their rock, punk and hardcore influences here a little more than the previous album, and they've continued to write some clever lyrics here while emphasizing their conceptual bridge between social relevance and a spot or two of good old fashioned blasphemy. In all, it's a strong effort, with a long track list (13 songs plus a few more if you've got the Candlelight release with the bonus Averno disc), though on a few, brief occasions it does flirt with mediocrity.

The first track "Retaliation" is a slow if effective march which functions purely on the immense, cold crunch of its guitars, like an war party of neanderthals stalking a torchlit night out of desperation to find some shelter. The track gets pretty fuzzy and atmospheric in its closing climes, as it catapults into the churning two-fisted slugger "The Fix is In", a thick slice of hardcore punk which simmers in the juices of its wailing guitars and dour mood, with more of the band's entertaining, pseudo-Satanic lyrics, of which my favorite line was the repetition of "Heretic at the stake/Let the motherfucker bake" in the bridge. "Incinerator" is a choppy, mud-spattered thrasher which rekindles a bit of that Slayer influence the band ever been high off, with a great energy and some killer lyrics:

"Children of the Underworld" follows, one of the best tracks on the album, a dire and slowly flowing roast of regrets and sorrow, guitar atmospherics fluttering about the gray winds of force the central rhythm emits, and an excellent breakdown with a massive chuggernaut riff that is almost impossible not to slowly worship with a steady, subtle nodding of the skull. "That's When I Became a Satanist" rips out more of the thrash breaks, with a grooving hardcore thrust and more of the band's dark sense of humor inherent in the lyrics. The chorus to this is a total dark punk headbanger. The quirky titled "Nobodaddy" celebrates good old fashion family values with a big, splashing groove that cedes to subtle mute picked rhythms that swerve with the bass to the inevitable climax. Another of the best on the album, followed by a catchy 2 minute piano "Intermission" which may remind you of how "DCLXVI" was used on To Ride, Shoot Straight and Speak the Truth, only this is better.

With the exception of maybe the more pronounced vocals, "Young & Dead" is a pretty close facsimile to the material of the first two albums, with steadily grinding guitars that storm ever forward, here layered in a few keyboard strikes to create a pretty horrific atmosphere. The breakdown in this one is all gloom and doom, like drowning yourself in tar. "Descent Into Inferno" breeds some nice, slow grooves with tremulous guitar effects in the verse, sliding across the land like a serpent bloated on lust and lies. However, I found the latter half of the track somewhat lackluster, in particular the slow crushing stoner grooves which conjured nothing but apathy. "Public Burning" is another of the band's socially charged anthems towards castigation of the oppressor, with some half decent, if forgettable punk riffs that morph into a grooving rockslide.

Which leads us into the twilight minutes of Inferno, beginning with the bouncing, carnal gait that chugs under "Flexing Muscles", an indictment of our far too image conscious Western civilization, kind of an attempt to trim the fat out the shallower end of masculinity, like Fight Club only more metal. I dig the fuzzy moldering of the guitars in the bridge, but the breakdown leaves a little to be desired. "Skeleton of Steel" is a slow, petulant thrasher which is suitable for a calm and controlled moshing, a cute little Slayer-like rhythm woven between its more brutal verses. "Night for Day" is the finale of the core album, a great track which recalls "Chief Rebel Angel" but truly crushing and depressing, making good use of atmospheric elements like a tolling belltower and subtle sweep of orchestration. This is another of Inferno's best, and I found it interesting as the following album Serpent Saints would go this route often with tracks like "When in Sodom".

If you have access to the edition with the bonus Averno disc, then I'd truly recommend you splurge on this instead of just the single CD, since it has some worthwhile non-album cuts. "When Humanity's Gone" is a burning, rollicking old school Entombed death metal track with a sludgy bridge, followed by the more hardcore infused "There Are Horrors of 1000 Nightmares". The chuggy "Random Guitar" is possibly the strongest track on the bonus EP, with a fun feel to its, some edge harmonic riffs and a solid groove. After these, there are 'video edit' version of the band's cover of Stillborn's "Albino Flogged in Black" and "Retaliation" from this very album. Neither could be considered important, unless you haven't heard the cover, and there are also videos included here for both of these.

Inferno is certainly a strong value, and belongs as a check in the positive category when examining the peaks and valleys the seminal Swedish outfit's roller coaster career. The majority of the tracks are great, even if they may feel a little more subdued than the previous album. The dark tone in general of this effort is very much appreciated, adding a cohesion to its many tracks and the ominous implications of its lyrical matter. I could definitely skip out on "Public Burning", and parts of "Flexing Muscles" or "Descent Into Inferno" and feel like I've lost nothing, but that's not a bad price to pay when you consider the quality of the difference left over. This is of course a stopgap between two better albums, but there are numerous tracks to which I return often.