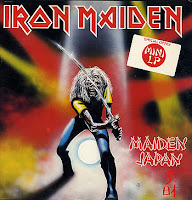 Although Live After Death stands tall as my favorite live offering from Iron Maiden, and perhaps one of my favorite live albums ever, I would have to give credit towards Maiden Japan as a close second, and certainly the go-to recording if you're interested in the Paul Di'anno era of the band. Though it was originally released as a 4-track EP in 1981, I am reviewing the vastly superior 1999 digipak, remastered and sent out to fan club members like a gift from God. It might be a little hard to track down these days, but I have word that it is often carried through a series of tubes, and perhaps you could make out your check to a Mr. Paul Di'anno, the former singer who is possibly NOT rich enough to one day sip daiquiris alongside Walt Disney in cryo-land.

Like so many other great bands, Japan was one of the first countries to throw down enthusiastic support for Iron Maiden, inviting the band over for live performances and getting quite wild here in comparison to some of their reactions at concerts. Maiden Japan was recorded in May of 1981 at the Sun Plaza in Tokyo, and it sounds excellent, a great send-off for Paul Di'anno (his final recording with the band). There are 17 tracks here, and supposedly an even longer bootleg exists with a 2nd version of "Running Free" from the same gig. The debut is represented through "Strange World", "Iron Maiden", "Remember Tomorrow", "Phantom of the Opera", "Running Free", "Transylvania", and "Sanctuary"; but the majority of the material is off the Killers album: "Wrathchild", "Another Life", "Genghis Khan", "Murders in the Rue Morgue", "Twilight Zone", "Drifter", "Killers", "Innocent Exile", and "Purgatory". The set is rounded out with the cover of Montrose's "I Got the Fire".

So basically, with the exception of a few tracks ("Prowler", "Prodigal Son", "Charlotte the Harlotte" and "The Ides of March"), you are presented with nearly the entire content of the first two albums in great, live stereo sound. There is something rugged about this album which has endeared me to it; the band is spot on for almost the entire performance, but the bass is given a bouncy abandon and the guitars feel good and raw. Di'anno is on fire, and even his over the top rock star inflections (which are part of the reason I will always prefer Dickinson) fall into line, making this a 75+ minute essential live audio experience for all but the most softened poseurs among you. In particular I enjoyed "Wrathchild", "Murders in the Rue Morgue", "Phantom of the Opera", and "Remember Tomorrow", but I must admit "Drifter" also really stands out in the crowd, a sonic crescendo of everything good about the late 70s/early 80s, sounding like a party metal warp drive.

It's a crying shame that Maiden Japan has not been given a more mainstream release, because clearly it is worth owning nearly as much as Live After Death, and it's far better than their other official live offerings like A Real Live One/A Real Dead One. Do what you must to acquire this, but avoid the original US EP release, which only included "Running Free", "Remember Tomorrow", "Killers" and "Innocent Exile". As a window into those important, formative years of one of metal's royal families, Maiden Japan is close to mandatory.