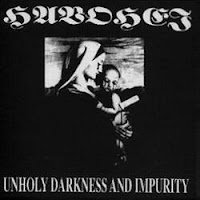 You are not in Kansas anymore. You are trapped within the mind of one of the sickest fucks to ever commit himself to tape, New York's Paul Ledney. The date of these heinous crimes, 1993, the same as the birth of this, his most interesting body of work, the timeless traction that is called Havohej. Experimental from the start, this project was (and still is) an attempt to strip the expression known as black metal to its very core, a surge of godawful noise and vocal retching which could make a Virgin Mary statue weep feces and stir the flies for a thousand miles around. Ledney wanted aural crud, and he atteined it with his first release Unholy Darkness and Impurity, which defies all conventions and common sense at a mere 3 tracks and 6+ minutes of material...

Try and envision someone accidentally flushing a discman down a toilet with your head attached to the earphones, while Mayhem or something was playing. That is the quality of production on this recording. It's turbulent, messy excrement which crawls at you from the industrial waste surrounding you, with steady, monotonous drumming and bass so thick and caustic it should be made illegal. The opening title track is an exception, being an eerie choral synth piece of less than 2 minutes which transforms into an abomination in its closing seconds, a precursor to the 1:11 long blasting weirdness of "Behold the Prince of Peace". Yet, for all its ill intent, there is something fascinating about the bridge rhythm which pops up a few times here, a strange deviation which quivers like an extraterrestrial artifact discovered among sewer waste, shining its alien light across the bleak, blackened piss and poop-scape in which it has settled. "March of the 7 Priests of Mockery" utters forth a thick crust of bass which sounds like having your ear pressed against a jet engine, all shreds of sanity fluttering away, while Ledney's vocals rasp off into the shadows and an industrial bell tolls like a warning to lock your days and stay inside from the acid rain.

If this EP suffers anything, it is in brevity, for the music is so turbulent and disgusting that you cannot help but find yourself fascinated by its potential, and yet it is yanked away from you before you can attune yourself to its ungodliness. Somehow, despite the hostile sound and constricted breath of its composition, it was clear that Ledney was on to something, a genuine pulse he would later adapt and expand into full-lengths and EP recordings of greater substance. If you can appreciate this recording, then I'd certainly recommend you read further into his discography, as you possess the fiber of very few fellow beings.