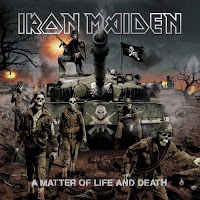 Empires rise and fall, men age with their gods and kings, stars ignite and contract, asteroid belts continue to hover across the firmament, and through it all, Iron Maiden continues to slog forth relentlessly, bringing their aged and fermented heavy metal to new generations of bright eyed youngsters and those crazy bastards that loved them all along. As of 2006 I cannot say I had any expectations whatsoever from this rusted old tank. They had thrilled me from 1980-1988, flirted with me for a few years beyond that, had me filing for divorce for the latter half of the 90s, had a quick encounter of makeup metal at the turn of the century, and then hung me out to dry once more. A Matter of Life and Death was just another frame of time, as sure as my morning coffee but doubtfully as sweet.

I had felt Dance of Death might function more realistically under the title 'Dance of Dragged Feet', but that album had come and gone without much offense, simply a dull endeavor rather than an outrage. At 72 minutes, this was going to be the longest Maiden album yet, surpassing the numbing duration of The X Factor, and no Derek Riggs cover in sight, instead adorned with a decent piece by comics illustrator Tim Bradstreet. The album has a nice, bright sound to it which I felt was lacking on its predecessor, and this is in part due to the lack of a final 'mastering'. Iron Maiden wanted to stick it straight to your gut, and so they did. It sounds great. But what of the songs?

Once I finished listening through the first track to this 14th album, "Different World", I had at least the impression that they were going to wring out some late inspirational tears as they did with Brave New World. For this track reminds me quite a lot of "Wicker Man", with the same emotional ballast and accessible hooks. It's not as powerful, but it will suffice, especially if the rest of the album can carry the torch. I was eager to listen to "These Colours Don't Run", partially inspired by the entire Ozzfest/Sharon Osbourne vs. Iron Maiden with hardcore kids and eggs debacle, but blown into a far broader meaning here through the lyrics. Great song title, but the song is little more than average, with a chorus that feels redundant. "Brighter Than a Thousand Suns" is a solid enough tune, with some cool guitar melodies that arch beyond Bruce's verses, but I didn't find much in the way of payoff lying in ambush in the nearly 9 minutes of time it took to finish.

"The Pilgrim" has one of the band's traipsing folk-like memories shorn off at the neck towards a thrusting rhythm, then morphing into an acceptable, atmospheric chorus with some nice backing vocals. "The Longest Day" is powerful and emotional, but riff-wise it's simply not all that meaty, playing its best moments through the chorus guitar melody. "Out of the Shadows" is a gently flowing ballad with a few minutes where the chords erupt or the lead shines, but I'll be honest, unless it's being blared right before my ears, I tend to entirely forget its existence. "The Reincarnation of Benjamin Breeg" was the first single to this album, and again, a couple of minutes of ballad with clean guitars before you get to the metal bits, and those are at least somewhat catchy for the dirty groove of the guitars that spawns the chords. But it doesn't support the 7+ minute length.

And from there out, all the songs are pretty long. "For the Greater Good of God" is over 9 minutes, and has its highs and lows, though everything aside from the stunning melodic chorus feels redundant with tracks that the band has written in the past. I was excited to see a track called "Lord of Light", as this is one of my favorite science fiction novels, from the acclaimed Roger Zelazny. Of course, like "Childhood's End" on Fear of the Dark, the song has little in common with the book except for the title, though some of the fiery images in the lyrics might remind one of the characters. Unfortunate! As for the song itself, it slowly escalates into a fairly powerful groove, with Dickinson going off at every opportunity. "The Legacy" is another track to start off with acoustic guitars and slowly climb itself up to the actual metal, a tactic the band has used far too many times since their heyday in the 80s. But there is some eventual payoff here, and it's probably one of the better songs overall on the album, like a Maiden prog-rock opus once more over 9 minutes.

Overall, A Matter of Life and Death is not really a matter of life or death...but it damn well sounds good, with perhaps the best production to mine ears since the band's 80s albums that I so fawn over. I feel this another album where much fat could be trimmed down about the actual pork, in particular the excess use of mellow intros which the band needs to just kick in the nuts. Even the better songs don't exactly scream out with replay value here, but there are many pleasant melodies scattered throughout and the performance of Dickinson is nothing to scoff at.

Highlights: Different World, For the Greater Good of God, The Legacy