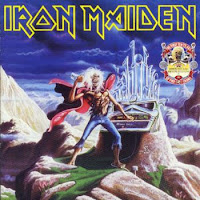 Only a band like Iron Maiden could be so affluent as to reserve the ability to release singles from a LIVE album...and yet, here they are, both of the singles from 1985's Live After Death, gathered in one place as the 7th fragment of the band's First Ten Years EP collection. Both Running Free and Run to the Hills are complemented with a pair of additional live tracks that did not appear on Live After Death, so it feels a rather natural extension and a further means to make a little money. And to be honest, I liked the recordings a lot, they've got the same virile clarity that possesses the full-length, and thus remain among Maiden's best live offerings on disc ever (I'd gladly take even the B-side live tunes here over some of the band's later live albums like A Real Live Dead One).

But is it that much of a value? If you're actually collecting The First Ten Years, then yes. If you're obsessed with Iron Maiden so much that you want your record bins or bedroom walls sporting all the cover art, all the thrifty details, or you get a hard-on for Nicko McBrain's almost schizophrenic narrative (I swear, the man's got like a dozen or more bad comedians inside his head; at least one for each drum), then yes. If you're NOT an asylum-bound risk to our society, well then you can likely skip this, like any of the band's singles or EPs.

But as far as these particular vignettes go, Running Free/Run to the Hills is not so foul to the taste. You get 40+ minutes of material, though 12 minutes of that playtime is devoted to Nicko's storytelling. The B-sides to Running Free are "Sanctuary" and "Murders in the Rue Morgue", both of which represent some of Dickinson's best live renditions of the tracks, with plenty of crowd thrilling and the Steppenwolf-life rock swing of the former in full, and a little break in which Bruce works up the crowd into a rabid froth. Joining Run to the Hills is "Phantom of the Opera" and the instrumental "Losfer Words (Big 'Orra)", the latter of which is a pleasant surprise as it's not the first song our thoughts leap towards when we think of a Maiden live set. As a diehard Powerslave fan (that is one of their two albums I consider perfect), I am thrilled for its inclusion.

The Nicko narrative here, Part VII, feels like a child has been fed too much sugar on the spoon, but he does manage to actually get into the details of the original singles, the Long Beach performances behind them, and so forth. When he's speaking calmly, he's actually quite charming, but you are constantly getting a Doppler effect as his voice swells and dies. And that's the thick and thin of this EP, one of the better in The First Ten Years series, since there are four unique tracks present, even if they're all just live songs.

Verdict: Indifference [5/10] (but they ain't got a thing on me...except extortion)