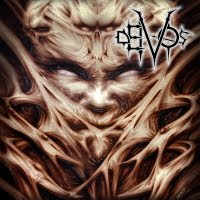 By now I've formed such a high set of standards for Polish death metal that when a band like Deivos comes along like this and just trounces my ass from floor to ceiling, out the door and down the steps of my home, under the next truck or construction vehicle to roll down my street, I can't really say I'm all that surprised... Unique Leader, to whom such ferocious acts are also no surprise, has scored themselves another winner with the band's second effort, Gospel of Maggots, one of the tightest and most talented death metal onslaughts I've heard yet in the year of 2010. But though the band's writing reads like a 'how to' guide for brutal, dynamic music, the band should get even further props for their enhanced awareness to the subtleties of percussion and a solid knack for knowing how NOT to bore you with the writing.

Try and imagine a realm between Polish mainstays like Vader, Behemoth, Decapitated and Lost Soul, and the intense Californian assault of a band like Severed Savior and/or Sepsism, and you can get a general consensus for how Deivos explores their insanity. Surely, you've got the obvious leanings towards Morbid Angel, Cryptopsy, Suffocation, Deicide, Cannibal Corpse, and the like, but these are pretty much the given at this point for any young act to enter the modern sphere. However, Deivos are not exactly young, having been around in other Polish acts like Abusiveness, Squash Bowels, and Engraved (several of them have some solid black metal roots). And it would be hard to imagine a band putting out an album like this without having done quite some time in individual musical development.

Gospel of Maggots is like a cacophony of carefully orchestrated hammers that known exactly when to time their descent in various patterns and combinations upon every joint in your body. Tracks like "Psychopathological Compulsion" and the spry "Wretched Idolatry" are acrobatic enough to win Olympic events, but the band can also open a tune with some good old school ambient horror, as with the sick fucking title track. I had mentioned the percussion earlier, and it does strike me as somewhat unique in the band's field, with an increased use of cowbell or woodblock-like sounds that you don't often make out among the blasting and double bass. This guy Krzysztof Saran is a beast, and you are more than likely going to be hearing more about him, because he's one of the few metal drummers I can think of that perform in such an intriguing manner that I could listen to the drum track alone and still enjoy myself. But I don't mean to steal any thunder from the bass or guitars, as everything here is performed with intense rigor, other worthy tracks including the mathematical force of "Trial of Bloodletting" or "Failed Mutation", and the dizzying energy of "Kept in the Dark".

These guys can easily lock horns with the likes of Lost Soul or Decapitated, so if you fancy Polish or tech death metal in general then there is little reason to hesitate in checking them out. Compared to their earlier album Emanation from Below in 2006, this seems like an education in increased violence and fortitude. I found most of the songs here more forcefully impressive than memorable, so I won't give it the highest honors, but I seriously have no doubt that the intended audience will have a 'blast'. The album is so frenetic and heavy that I found most of my muscle groups ached after listening to it, and I could clearly see spirals through my double vision, like having a mule kick me square on the bridge above my nose.