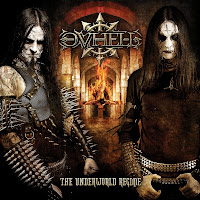 We've all heard the drama by now over the Gorgoroth name dispute and the subsequent split of the band, with King ov Hell and Gaahl moving over to form God Seed, and Infernus (winner of the court case) continuing on under the original band name. We've all seen the shit flung about the internet and YouTube and whatever place the kids with nothing better to do are hanging out these days. And now, the smoke has cleared. God Seed is no more, Gaahl has retired from metal music (we'll see about that) and King ov Hell has formed a new project with Dimmu Borgir's frontman Shagrath, which incorporates most of the music written for God Seed, but with Shagrath's lyrics.

Congratulations, we've all graduated with our scene degrees, for a scene that has nothing to do with us. To quote a little of the HackMaster, "Let the dice fall where they may", and the result of this roll is a straightforward black metal effort which, while not about to turn any heads for its nuance, is a solid interpretation of the skills and credits of its makers. You won't hear any of Dimmu Borgir's flighty orchestral maneuvers on this album, it's a grimy burst of pure, twisted flesh that manages no gimmicks above a little flange to Shagrath's voice, and the man sounds just as diabolical here (moreso) as anything he's recorded with that other band. That isn't to say that The Underworld Regime lacks atmosphere. On the contrary, there are some synths burgeoning off into the depths, beneath the ripping, full-bodied tone of the dual axe work, and this is successful enough in tracks such as the opener "Devil's Harlot" or the swollen, hostile miasma that is "Invoker".

Of course, the studio lineup doesn't just end with these two. Frost of Satyricon and 1349 fame handles the drumming on the album, a solid if not impressive platter of footwork and writhing, functional beats which feel good and raw against the momentum of the guitars. Teloch of Nidingr (also live with 1349) and Ice Dale (Enslaved) make for a fine compliment to King's anti-tank basslines, thick as thieves but still sharp enought to slice sandwich meats. Together, this Faustian fivesome wrangle their way through 8 tracks in about 37 minutes of nigh memorable riffing and an overall atmosphere far stronger than its constituent pieces. The album's got its blasting blowbys here like "Invoker", "Acts of Sin" and "Krigsatte Faner", but to be honest I greatly preferred the moments where the band slowed the pace to let the sinister tones scorch their way into your cranial cavity. I am thinking of the twisted panoramic "Ghosting" or the chaotic carousel of black/thrash that is "Perpetual Night". The closing track "Hill Norge" is also noteworthy for its serpentine, clenching rhythm. Stylewise, the writing mirrors everything from their alma mater bands (Gorgoroth and older Dimmu Borgir) to a dash of Immortal in the shining, arching melodies that seem to inadvertently erupt from the guitar chords.

The Underworld Regime is not about to blow anyone away, and its members have all been a part of something greater in the past, but it DOES provide a solid banner under which King ov Hell can regroup, gathering his soldiers for the next live attack. Shagrath has a lot more presence here than one might expect, due to the fact that the glaring, signature symphonic wall of his other band is simply not found here. The tracks all flow from one to the next without much deviation, and the fires ov Hell remain strong with these two. It should be interesting to see the reaction at large to this band, and the inevitable comparisons to the latest Gorgoroth album.

Nice review. I haven't listened to this yet, but where do you fall on those inevitable comparisons? I thought the last Gorgoroth was insufferably boring, and I'm hoping this is a stronger effort.

I probably would have given the latest Gorgoroth a 6/10 score. I liked it a little more than you did, some of the riffs anyway.

So I think this is better overall, but neither is worth the money.