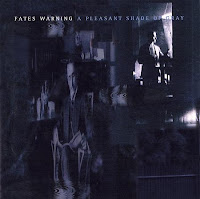 A Pleasant Shade of Gray is the sort of album I had always expected Fates Warning to write and release, a full-bodied concept album which took a similar approach to their 20+ minute track "The Ivory Gate of Dreams" from 1988's No Exit. Progressive metal bands have always excelled at such efforts, much like their rock forebears, and I can think fondly back to the first time I heard something like Six Degrees of Inner Turbulence, Operation Mindcrime or Nothingface, and was blown away by not only the depth of the material but the great music included with it. What I did not expect is that when it came time for Fates Warning to put their own spin on this niche, they would fall so flat.

The album is called A Pleasant Shade of Gray, and from its title alone you can gather that it will dabble in themes of melancholy, the mundane subtleties that fill all our days on Earth in this industrial, inspiration-starved Western civilization. But it's not the theme that really stumbles here, it is the lethargic songwriting and the failure to evoke even the most average of memorable melodies that the band have always excelled in. It's like a soundtrack to a movie you don't want to see; a 'gray' mist that descends upon the listener to most annoying semblance of ennui. It's like one of those lectures at university which had you so bored that you couldn't stop looking at the clock, wondering what the campus cafeteria would be serving in the evening and whether you had even the faintest chance of getting laid. Seriously, your thoughts could wander nearly any place and arrive at something more interesting than what has manifested on this disc.

And it's not due to any shift in tone or style by the band. No, this music is not a far cry from anything they've previously recorded. It's simply stretched out so painfully that it inhabits a void where all the band's good ideas seem long since dead. There are 12 tracks here, each titled in Roman numerals, which are aesthetically about as interesting as the music they represent. Even when the band breaks out into the more jamming segments of the album, like "Part III" or "Part VII", there is no interesting riff to be found, no spark of life. For example, take the dull central riff of "III" with its listless harmonic...no positive rhythm will ever emerge from it, it simply does its time before a mediocre groove develops under the mediocre vocal hook. It's like some guy bored in his jam room repeating the same useless riff just to hear himself think, while the neighboring bands listen on with apathy at the pathetic rambling tone.

The heavy use of electronics, the most the band had included by this point, doesn't exactly cripple the core riffing, but it is likewise weak, summoning up nothing but a desire to repeatedly mash the 'track forward' button on your CD player. There are pianos here, and there are acoustics, both of which are also leeched of all potential captivation through the unfortunate selections in notation. Try as hard as I might, I can find NO silver lining in this cloud. It's impossible to pick out a highlight...parts "XI" and "XII" seem like an attempt to re-establish some sort of mirror to the band's better days, but even these feel like a gaggle of depressed monkeys picking up instruments in an empty emulation of Connecticut's storied metal gods. The lyrics are dry and cliched, like a caricature of the most banal material of the past three records.

I don't know what kind of vampire crawled into the Fates Warning rehearsal space and sucked out every fiber of being and talent from the band during the songwriting process for this album, but it's seriously the progressive metal equivalent to Muzak. Only Muzak is often more memorable than the 54 minutes of wasted space and time that this album represents. It's been 13 years now, and while the band has not created anything of significance in its wake, we should all be grateful that they have not attempt to further plum these empty, uninspired depths. I came back to this album thinking there might be something I missed the last few times I suffered its endless, laconic framework, but came out of the experience trailing nothing but the eyes of the abyss at my back, laughing as I went.

Highlights: if you managed to listen through this album without a nervous breakdown, a fit of convulsive psychosis, or suicidal confrontation, congratulations, you are one hard mother fucker. The Armed Forces could use a few good men like you.