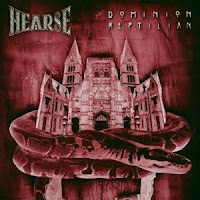 After parting ways with Arch Enemy, Johan Liiva Axelsson was out to prove himself with several new projects. The first of these, Nonexist, released a single album in 2002 which had a similar sound to his work on Stigmata and Burning Bridges, if a little beefier in tone, but it would be Hearse where he really took flight. In the earlier years, Hearse had a sound quite like a hybrid of his albums in Arch Enemy and the death & roll sounds of Entombed or Desultory's Swallow the Snake. Thick rock and punk inspired death metal rhythms interspersed with breakout melodic riffs that feel similar to what the Amott brothers were writing in Liiva's alma mater. It was pretty clear, even with this debut, Dominion Reptilian, that this would be the band with the staying power to satisfy Axelsson, as they are five albums deep into their career now and honestly...they just keep getting better.

All this being said, Arch Enemy was not the first place in which Liiva had built a name for himself. He was also a member of the cult alt. death metal act Furbowl, and here in Hearse he is rejoined by Furbowl drummer Max Thornell. Together they blaze through 9 tracks and 43 minutes of premium grade Swedish traction, several of which are culled from the band's prior releases, the Hearse demo from 2001 and Torch EP from 2002. If you were lucky enough to score a digipack version of the album, you'll also be treated to a pair of bonus tracks, one of which, "Avalon" joined "Torch" on the EP in the previous year.

The album opens with the title track, which flourishes some of its rather dull death metal groove rhythms in a slew of frenetic melodies that escalate it into something more. Axelsson is himself here, his vocals given full reign over the carnal but uplifting epitaphs created through the riffs. "Torch" is a better song due to the busy shuffling thrash rhythms and bluesy wailing, with a glorious bridge that channels unadulterated rock & roll across some further, deep grooving. Like a lot of blues leads that are just hammered onto metal tracks, I didn't care so much for the actual solos, but the harmonies are quite good here. "Cosmic Daughter" is not only my favorite track on Dominion Reptilian, but remains one of my very favorite Hearse tracks to this day, for its subtle, gothic bass flow and brilliant escalation through melodies, enveloping some of Liiva's more gravely tones which are perhaps the only things that hang it just shy of utmost perfection. But the atmosphere is phenomenal, regardless.

"Contemplation" creates a forceful punk-rock distorted bass rhythm before the guitar chords crash out beneath the weight of numerous explosive harmonies. The song actually feels a lot like some of the band's newer material (Single Ticket to Paradise), with solid hooks and a cosmic vibe which is similar to what one might feel on a Spiritual Beggars effort, although Hearse has a far darker tone due to the death metal that flows through the band's blood. "Rapture in Twilight" is a solid mid-paced rocker with some nice four chord action ringing out behind the forgettable leads, but not one of the stronger pieces on the album. This and the following "Well of Youth" are taken from the 2001 s/t demo, but the latter is a little stronger for its vibrant death metal rhythm in the verse, and I like the breakdown with the sirens and fuzzy solo. "Abandoned" trots along like a Swedish parable of "The Trooper", little leads ringing out over the writhing central melodies.

The back end of the debut provides some of its more memorable moments, beginning with the storming melancholy of "End of Days", in which the verse rhythms buzz with a brash immediacy, the bridge resounding with Liiva's barking. "So Vague" is like a space bar death blues hymn, perhaps the single most atmospheric track on the album, with some nice, haunting synthesizer work to fade it out. If you've got the digipack, this is followed by the bonus track "The Unknown", which opens with some wah-wah and subtle, serpentine riffs and features a gentle acoustic break before the rather mundane, screaming solo. This is decent, but I'm far more satisfied with the inclusion of "Avalon", burning and aggressive and highly memorable, and the closest to true death metal the album gets, without abandoning the screaming rock guitar harmonies.

Dominion Reptilian is certainly not the best of Hearse's albums, nor is it better than the previous efforts Liiva had taken part of (Stigmata, Burning Bridges, and Deus Deceptor are all superior to various degrees), but it's got more than a gallon of gasoline heart and a malleable potential stowed within it that will thankfully manifest through the band's career. I'm not a huge fan of all the band's lyrics, but that's not an issue exclusive to this one album. They're the sort of vague, pseudo sci-fi 'we're all hanging on the edge of darkness and need some universal peace' type of lyrics that fail to compel me, but this is no fault of the delivery. There aren't a lot of death & roll bands, or melodic death metal bands, that deserve your attention, but Hearse is clearly one that should merit your time.