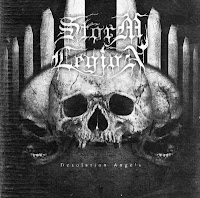 Though Storm Legion is not such a recognizable force in European black metal, its membership is drawn from a line of established Portuguese acts; Ainvar having played guitar on both Sirius full-lengths, and Nocturnus Horrendus double dipping with Corpus Christii (in addition to Morte Incandescente, Genocide Kommando and others). From what I am hearing on their sophomore album, this should soon change, for Desolation Angels is a tight and dynamic opus with a superb production and a good deal of character, in particular the attention to riffing and great vocals which reminded me of Nocturno Culto's later, hoarse efforts, but not as grating.

The album explodes with one of its very best, "Planetary Dagger", a fast and feral piece which builds melancholy through the lethal but melodic riffing and brunt force of the vocals, an incendiary charge that abates for a few atmospheric segments with churning chords out of the Darkthrone/ Bathory camp. "Spears of Eternity: The Great Cycle" uses its slower paced rhythms to create arches of fell glory over the vocal torment (which remind me much of N. Culto's work fronting Sarke or the more recent Darkthrone records, never a bad thing!) The record continues to divide up its attentions between these faster, glorious hymnals like "Path of Persistence", "Inner War", and "Descent" all razor edged and memorable; and the more pensive wanderings of the tank-treaded "Fragments of Morality", or the bridge rhythms of "Lost and Forgotten" and "Black Waters". The band's namesake is a brief acoustic instrumental with some pianos and crackle, pretty much the perfect interlude between the surrounding violence.

A sign without a name, invisible
purified in blood
lacking density
Steer my way
united we walk in voluntary, mutual dictatorship

I was not only feeling the music, but the very poetic approach to the lyrics, which relay a deeper side to the band than the typical Satanic groveling one comes to expect out of the genre (which, to be fair, I adore for its own reasons). Storm Legion can't confess to 100% originality, but they certainly can write songs which feel fresh, powerful and clear, with a message spoken not only in thunderous instrumentation but a bard's tongue. Desolation Angels is a well balanced onslaught which stands among the more interesting black metal I've heard yet in this new decade.

I'm loving this so far. What a rad record.