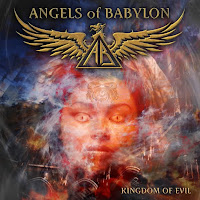 Angels of Babylon is another positive product of a massively inflated metal scene, a band made of networked friends and musicians with quite the repertoire. Probably the best known contributor here is bassist David Ellefson (Megadeth, etc), but drummer Rhino Edwards has played with Manowar and Holyhell, and singer David Fefolt with Alex Masi among others. Together with guitarist Ethan Brosch, they create here a pretty solid debut of good old fashioned heavy metal with a dash of orchestration and atmosphere that simply works. Apt comparisons could be drawn to Virgin Steele, or Manowar, bands that tend to write very anthemic American power metal music, but the Angels don't sound quite like any one single artist, and I could hear traces of everything from later era Sabbath, Ozzy. Fefolt has a powerful voice etched somewhere between Matt Barlowe, Biff Byford, Blaze Bayley and John Bush, which is admittedly quite a range, though he never goes off the handle, instead keeping things within an acceptable middle octave that fits with the simple, hard rocking riffs.

Even though it's used only at the most basic of levels, the orchestration here feels rather unique along with the metal core of the band. Horns, pianos, bells, all very simple and effective sounds synthesized here that never overstep their boundaries, creating a successful added layer that many of these roots power metal outfits simply don't possess: atmosphere. Brosch's leads are also quite good, though their placement can often become predictable, he rarely fails to scratch out a catchy lick or two in each, and the rhythm section keeps the performance reined in rather than transforming it into a jam session.

"Conspiracy Theory" kicks it off with atmospheric horns and pianos for the verse, with a chiming chorus that conjures up the same catchy, crushing atmosphere you might find on a modern Saxon album. "Apocalypse 2012" reminds me of something Queensryche might have rustled up in their days, plus the horn sounds, ringing ambient synthesizers and Fefolt incorporating a grimy edge to the vocals that reminds one a little of Armored Saint's John Bush. But as cool as these tracks are, my favorites on the album have to be the steady, grooving mutes and wild orchestral strings of "Night Magic", or the shining organs and bluesy verse of "Tear Out My Heart". A few of the tracks near the end of the album don't quite maintain the same level of quality, for example the drippy "Angels of Babylon" namesake track, but it ends on a powerful note with the great "Second Coming", its pianos and choirs shifting off into the steamy nights of myth.

This is pretty simple fare, by which I mean all the little virtuosos out there who require a band to play metal like it's a circus and they're the final act will be pretty disappointed at the spacious writing here. Every vocal note and synth strike is given plenty of time to feel out, and the band never crosses a mid pace. And they don't need to. This is good old heavy metal with all the pomp and circumstance that a better atmospheric band can lavish upon their compositions without losing direction, placing Angels of Babylon at an interesting crossroads between the old and new.