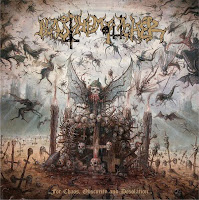 Blasphemophagher is a wild Italian band which mutes the subtle differences between black, death and grind into a forceful unity that vomits upon the holy altar like a blood-drunk, demonic evacuee from the AA clinic of Hell. If you experienced their first album in 2008, Nuclear Empire of Apocalypse, then you already know to expect their killer cover imagery, ridiculous (awesome) song titles and unflinching addiction to aggression. I realize I use the word 'barbaric' very often in my reviews, and perhaps too often, but seriously...look up the term in the latest urban dictionary and it should have pictured there an image of this trio in all their blasphemy. What other band can pull off monickers like Atomic Incinerator of Necronuclear Collapse & Plutonium Winds (guitar), R.R. Unholy Bastard & PhospheneWargas (vocals, bass) and Necrovomiterror (drums)?

All joking, self-deprecating elements of parody aside, Blasphemophagher is yet another of those bands that will appeal to the cult sect of black, death and thrash fans that keep labels like Hell's Headbangers and Nuclear War Now! in productions (these Italians belonging to the latter) in business, and that is because they believe in the bottom line. Play it fast, play it loud, play it raw, play it heavy, and play it like the past 15-20 years didn't happen. You'll hear all the roots here: from the blackened vitriol of Mayhem, Bathory, Impiety and Hellhammer to the influence of disgusting grind and violent death metal ala Napalm Death, Repulsion, and Extreme Noise Terror. R.R. Unholy Bastard's torn open, brutal vocals even remind me a little of Martin v. Drunen fronting Pestilence in the early years (but only a little). If that sounds like your bag, and you don't mind a little bit of tongue in cheek blasphemy in your blasting necromancy, then I doubt you'll find any problem with this. The album lyrically deals in perversities, lust and the reign of ancient evils from beyond the known universe. In other words, it's like Fox News or CNN, only Italian and wearing a lot of fucking leather, chains and spikes.

Dynamically, I can't claim the album is all that interesting. It exists through a series of blasting valleys and grinding peaks, and when listening you feel like you're being dragged behind a nightmare-horse until your skin is flayed on the rough, abysmal terrain below you, only to be trampled by cross-herds of hellhounds with backpack nukes strapped to their mangy hides. If you can dig one track here, you can dig them all, and then your grave. Choosing favorites is a little rough, since they are all flesh-peeling, but I'll run with "Perverse Multiverse of Damnation", "Fleshripping Terrordeath", and the hyperstorm "Vengeance from Nuclear Abyss" as examples of the better atrocities you will find on this album. The riffs are quite straightforward, if they're not raging in a series of deathgrind chords they're either streaming foul, dank old death metal or the occasional lapse into WWII-antitank thrash. Not really a band to bother with intricate, memorable riffs, they seek success only through violence and violation, and to this extent, ...for Chaos, Obscurity and Desolation... is such a winner that you'll want to have its babies, for 40 minutes or until you just can't hang anymore with their riotous petulance.

The album is produced in a very raw and gory fashion that shines like a blood spattered pitchfork thrust through the cervix of innocence, twisting entrails loose all the way. The bass is a semi-audible torpedo of distortion, and the guitars here buzz like a swarm of irradiated wasps attacking a chapel to lay their eggs in the pious hosts within. Graaaaaaarrr, if ever you wanted to decapitated someone, this record might serve as an adequate guillotine. Ignore Blasphemophagher at your own risk, and you might one day simply find yourself incinerated in their wake. As for myself, I am building a shelter, stocking up on canned foods and leaving a sacrifice outside every week for that slim prayer of survival.

Highlights: off with your heads!