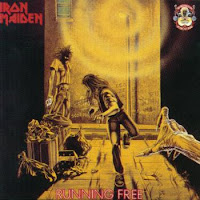 The First Ten Years: Part I

The First Ten Years EP collection begins right where it should...at the beginning, with the first two commercial singles issued by Iron Maiden in 1980: Running Free and Sanctuary. Both of these singles were culled from the band's debut Iron Maiden, though Sanctuary was originally independent of the album, added later as a bonus track, and many have since come to accept it as a part of the whole. I should also note that these are the real deal, original recordings with Paul Di'anno on vocals, they have not chosen to retrofit them with Bruce Dickinson, and I've always admired the healthy respect the band has given the man despite his early fallout with Steve Harris and manager Rod Smallwood. Maybe not always for the man himself, but his flagship work that put the band on the map.

"Running Free" is as rugged as ever, a total sing-a-long if there ever was one, with its gracious descending melodies post-chorus and a dirty, chugging appeal to the rhythm riffing that is undeniably timeless. The B-side to the single was "Burning Ambition", and though it's not one of the most memorable Maiden tunes, it was at least a pretty clear sign that they were intent on including some non-album material with their singles from an early date (of course, this did not always turn out to be the case). Still, there's a laid back feel to the chords, and similar melodies cut through its structure, so it feels a natural fit for "Running Free".

The Sanctuary single seems a little less valuable, though if you have an old copy of Iron Maiden without the song then it must have been a godsend. This track has always felt very close to Steppenwolf's "Born to Be Wild" for me, with a similar road-burned abandon, and it is joined by a pair of live tracks recorded at London's Marquee in April, 1980. "Drifter" sounds comparable here to the band's other live recordings on which it appears, and the cover of Montrose's "I've Got the Fire" is another good match with "Sanctuary" itself. Di'anno is having a blast here, but you can always tell that he was such a better component of the band when they were in their earlier phase, far closer to the hard rock of the 60s and 70s than their more morose, melodic work of the Dickinson era.

This leaves the first segment of the "Listen With Nicko!" monologue, and he starts to explain what this is all about, interjecting his silly schizophrenic humor like a patient in dire need of an injection and a long nap. Still, I find it most confounding to listen to the first few "Listen With Nicko!" segments, since the man wasn't even involved with the band at this point...would it not have been a better idea to use Steve Harris for these? Or maybe a Di'anno guest spot? My favorite point is at which Nicko calls the listeners 'lucky boys and girls'. Lucky for what? Spewing pence into your fat pockets? Also, the answering machine thing at the end is not that funny. Good thing you had drumming to fall back on sir, your comic fu is weak.

Running Free/Sanctuary is really not that valuable. Live recordings of "Drifter" and "I've Got the Fire" are available elsewhere, and the only thing of interest is the "Burning Ambition" B-side. Track this down only if you're putting together the EPs for your boxed set. Otherwise, move along.