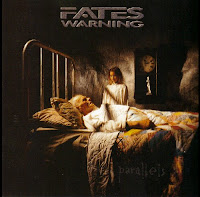 For the past few albums, Fates Warning had been making pretty bold and large steps in their music, from the initial transformation into a power/thrash hybrid with Ray Alder's debut No Exit, to the forward thinking direction of Perfect Symmetry. Parallels, the band's 6th album, is on a level playing field with it predecessor, with much the same style, and much the same balance of tranquil, dreamy acoustic segues and metal-lite subtleties. This is also probably the 'friendliest' of the band's albums, as in, you could probably play this record for your mother and she'd get something out of it (if your mom got something out of No Exit, well, you were one lucky tyke). Almost every track here was primed for radio play, and the production is polished up from Perfect Symmetry.

But is it too clean? Is this the point at which Fates Warning had crossed the apex of their career and begin a slalom down the far side? In my opinion, yes. As professional as this effort is, it's a double edged sword. The music feels extremely constrained, so that even its most powerful, melodic moments feel like a crack team of editors and analysts are pouring them over, to hew them down to only the most polished of stones. I did enjoy Parallels, in fact I find several of the tracks unforgettable, but it lacks a little of the dark factory feel of Perfect Symmetry, and feels like an attempt to bridge over into the softer terrain of some of prog. rock's most accessible acts, like the 80s-90s efforts of Rush, or Yes, Genesis or Marillion without losing the band's central identity. It's good stuff, but I really need to be in the mood to hear it, whereas many of the band's prior albums would PUT ME in the mood, regardless of where and when I was, if that makes any sense.

"Leave the Past Behind" is a very Rush-like piece, with sparkling acoustics that slowly build into a steady, captivating bass and the mechanical guitar chords of the prior album. The chorus is fairly obvious, but certainly a winner if you are a fan of Perfect Symmetry or Queensryche's smash hit Empire. It's an effective opening track, curt and comfortable, but no surprises lurk around any corner. "Life in Still Water" seems anything but still, as the volley of lush chords and Zonder's electronic drum fills splash about the surface. The latter half of the verse is great, for the ringing guitars that sear over the shaking bass, and it builds to an appropriate chorus climax. "Eye to Eye" forges a resonant intro with more of the brazen acoustics, and a calm but hooky metal lite rhythm ensues, a precursor to the tranquil lament of the verse. Again, the chorus feels predictable and subdued, and there is simply nothing else here of note except a very safe lead. "The Eleventh Hour" is the longest track on the album, and arguably the most interesting. The curtains part for a lurid dreamscape of somber, shining cleans and effects, while Alder embarks on a journey of escalating isolation to just before the 3:00 mark, where the hard chords arrive and herald an epic stream of melody, pure payoff for the listener's patience. But the best moment of the song is beyond 6:00, with an excellent guitar pattern that plays off the central rhythm.

"Point of View" feels like Geoff Tate and company sent an Operation: Mindcrime outtake to Fates Warning to see what they could do with it, a familiar pattern with the melodic, urgent chords over the potent, but understated rock beat. It's a decent tune, and in particular I enjoy Alder's performance in the chorus, an edgy banshee keening its message through a still night. "We Only Say Goodbye" is hands down the most memorable track of Parallels, and it's almost embarassing to admit, because this is the kind of track that should have seen a Shania Twain level of airplay. It's super calming and catchy, and though it's heavier than, say "Silent Lucidity", it seems a crime that this very track did not push the Connecticut veterans to some sort of massive US radio presence. I can almost picture it, 15-20 years down the line, all the Fates Warning fans being sick to death of hearing it on VH1 and every classic rock radio station in their region. Alas, thankfully it maintains its beautiful melodic abandon, and it may just be the band's best song in the past two decades...

"Don't Follow Me" puts us back on the path to the band's previous album, with a huge, forward melody recalling "Through Different Eyes" or "Static Acts", parting for another of the band's safe, moody verses before a decent chorus and great, spry lead guitar. "The Road Goes on Forever" is like a quiet afternoon at the local lake, sitting half in the shade of the trees by the beach while you shove aside that newspaper you were going to read, to simply soak in the idylls of your location. It's all clean, with Zonder emulating the water's surface through his percussion. Though I find the track sufficiently captivating while I listen to it, for some reason it doesn't resonate with me beyond the album, and doesn't have anything quite like the hooks of "We Only Say Goodbye".

It's quite telling that Parallels, while being the worst of the Fates Warning albums to its date of release, was still a high quality recording with a lot of good hooks in its gills. The songs are just as carefully crafted as you'll find on any album in the band's backlog, and indeed it's the type you could put on for the full 45 minutes while reading, napping or working on that college project. If you were a fan of the progressive rock of the 80s and 90s (only dabbling in metal), this album may very well have been your gateway into the band. I certainly was not as immersed here as by their previous work, and to this day I still long for the fantastic, dark scenery of the John Arch years, but Parallels was more than acceptable for a band exploring their options.

Highlights: Life In Still Water, The Eleventh Hour, We Only Say Goodbye, Don't Follow Me