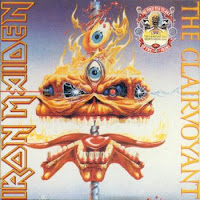 The Clairvoyant/Infinite Dreams EP is the 10th and final release in the First Ten Years collection. If you've been saving your pennies and spending them on each of these double-single packs, you would have now owned the vouchers required to order the box set in which to store them! Congratulations. You now own a collection of largely redundant singles with a few worthwhile B-sides that are possibly available somewhere else. In all seriousness, though, if you've got this entire set and it's in good condition, more than likely you can make some money off it (through online auctions or a metal market at a convention).

Interestingly, like the Running Free/Run to the Hills EP, this offering consists only of live material from the two original singles. So The Clairvoyant (1988) is missing the studio version of that song, but otherwise they are reprinted normally. The live offerings off of that include "The Clairvoyant", "The Prisoner" and "Heaven Can Wait", all from the 1988 Monsters of Rock tour at Donington Park, and they all sound great here. A good, airy soundboard recording, and how often do we get to hear "The Prisoner" live? I was most impressed with that track of the three.

The Infinite Dreams single from 1989 features three more live tracks, from a performance in Birmingham England. "Infinite Dreams" and "Killers" are no surprise, but then we are given the live treatment of "Still Life" from the Piece of Mind album, not something we hear every day, and the novelty helpts give it the edge over some of the more common selections. After these tracks we are given closure with the final "Listen With Nicko!" segment, and thank the stars for that. He does seem rather thankful here for being given the chance to communicate all these anecdotes to the fans, and thanks them for the band's success and buying this collection, so in the end you don't feel so down on the guy. He does seem rather enthusiastic to be finished his 'mumbling'.

The one big problem with this EP (and so many of the other First Ten Years singles) is that all the material is available elsewhere, through later releases. For example, all of these tracks are available on the bonus disc to the 1995 re-issue of Seventh Son of a Seventh Son. And the Infinite Dreams live tracks are available on the Maiden England CD. So there is a limited value at best, unless you have passed on those or you were collecting as these things hit the shelves. But as for the content, all the songs sound pretty good, definitely a positive live experience that you'll enjoy beaming out of your car or drunk at a party.

Judging by the fact that 2000 has already come and gone without another series of EPs called The Second Ten Years, I doubt we'll see another marketing strategy like this one. There are certainly enough singles out there since Infinite Dreams. Perhaps the band will simply gather the material up on full-length compilation albums, a cheaper alternative for the fans. In today's economic climate, I just don't see something like this happening, except perhaps a virtual version on something like iTunes But then again, we got the Somewhere Back in Time compilation...so expect the worst.