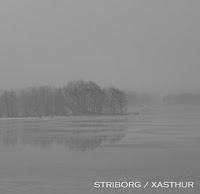 As hard as I might try, I can think of no two other artists within the bleak, black metal underground that could possibly complement one another like the impressive, depressionist Xasthur and the lord of forgotten trails across the Aussie nightscape Striborg. Thus, their limited edition vinyl split EP from 2007 is no mere eventuality, but a clash of the titans of obscura, each performing a track exclusive to the 1000 copies that will not disappoint those who have come to appreciate their impenetrable grimness. Neither of these artists is even bordering on the accessible, nor do they perform any of the more technical minded black metal that some would demand, instead relying on their innate abilities to channel the very core of darkness into their simple and atmospheric compositions.

Xasthur's piece is entitled "A Tortured Shallow Grave" and runs over 6 minutes, with charnel, gritty guitars that clang and wallop their haunted effigies below the simmering of synthesized flutes and organs. If ever you sought a soundtrack to an overcast, cold morning on which you sat upon a moor and daydreamed the ghosts of dead, muted lovers rising up to stare you into oblivion, I can think of nothing else I would so quickly recommend than Malefic's horrifying rasps morphed into this tapestry of guilt. Striborg's "The Epitome of Misanthropy" buzzes out of the speakers like a hellish wasp factory, conceived through absolutely disgusting vocals that feel as much feedback as actual pronunciation, and sloppy shifts in tempo that half endear me to its woes, and half threaten to drive me up the nearest wall. Still, the song (also over 6 minutes) picks up some good atmosphere within, as melodic undertones surge below the entropic wailing and somewhere, somehow, glory erupts within the turbulent deaths, a black promise.

You've got to struggle with the Striborg track a little more than Xasthur, which feels almost calm by comparison, but they both commit your sanity to the same depths, beyond the limit where the casual pop listener or even black metal fanatic can appreciate the happenings. If you haven't trained your ears to appreciate such disturbing sounds, and feel they won't fit into your limited panoramic view of extreme metal music, then your misgivings are unlikely to alter. But if you are a fan of these two gods of 'bedroom' black metal, I can see nothing but inverse paradise in your immediate futures.