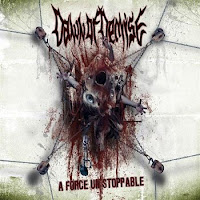 My first exposure to this Danish death metal act was the Lacerated EP they released a few years ago, which featured a few promising originals and some covers of Suffocation, At the Gates, and Obituary, all influences that can be felt somewhat in Dawn of Demise's modern compact of sound. There's a sleek, modern tone to this 2nd full-length A Force Unstoppable which compares favorably to the works of of many younger European death metal acts, but I found the album to be largely the sort of chug-a-long which may sound amazing on the surface, and might get a few jaws, elbows and knees broken at live gits, but leaves a lot to be desired. In particular, the very box-like broth in which the guitars simmer functions more on a thrash level than to exude any sincere menace, which I often demand of the best death metal albums.

The vocals of Scott Jensen are suitably thick barks which can bleed into guttural force whenever necessary, but they simply do not stand out, ever on this album, or among the mass legions of other local and underground level death metal acts. The riffing, while tightly executed throughout the nine anthems of the album, suffers a similar fate: perfectly fine for punching a wall or a human head, but can think of very few individual riffs on the album where my ears perked up to take notice. Songs like "Reap the Suffering" or "Multiple Flatlines" seem to channel a mix of Devourment's nonchalant slam death with very Pantera grooves that very easily evade the memory. As does the slightly Meshuggah rhythm of "Among the Tortured". The band is far better when they pick up the pace a little, like the blunt momentum of "Bludgeon" or the blistering death spinal chord which controls the violent impulse of "Heinous Acts of War" (some worthy riffs in this one, even the breakdown and lead rhythm).

As it turns out, the sophomore effort from the Danes is in fact a fairly stoppable force. Wholly clean and polished, punishing in a technical sense due to its chunky, hammering sense for rhythm, one cannot argue the professional effort put forth here. But there are so many bands who go that extra mile to exude an evil atmosphere and memorable riffing that I fear Dawn of Demise might get lost in the shuffle. However, if you seek nothing more than a set of new struggles to get your mosh on and fine tune your signature pit ministrations, or simply work out while you think about crushing someone's skull, then you could do considerably worse than A Force Unstoppable.