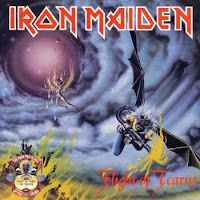 Because releasing singles is not incentive enough to grab a little extra cash from devoted fans or cursory listeners, Iron Maiden came up with a rather interesting marketing scheme in 1990 to release 10 EPs on CD and vinyl, each consisting of 2 of the band's singles from the first decade of the band's career, with an added commentary interview track featuring drummer Nicko McBrain. Once you had all 10 of these collectors' EPs, you had the full commentary track, and could use vouchers contained within the EPs to order a custom box in which to store them all.

Though an obvious cash grab, it was actually rather ingenious, because it at least added a little collectible value, and a better format for which to purchase these old recordings rather than track down the 20 individual singles. The 5th disc in this collection joins together the Flight of the Icarus single with The Trooper, both released in 1983, and probably a lot more sought after for the inclusion of the cover songs, though both of the A-sides are classics, especially "The Trooper". But if you've longed for the Bruce Dickinson-fronted cover of Montrose's "I've Got the Fire", here it is in stereo, repressed from the Flight of Icarus single. The solo is great, and the version here is probably just as potent as that which Paul Di'anno performed (you can hear it on several of the band's earlier recordings).

However, it is the cover of Jethro Tull's "Cross-Eyed Mary" which is the true gem on this release, a fantastic rendition in Maiden's capable hands. Few could fill in the shoes of Ian Anderson, but Dickinson is damn capable, giving the classic an injection of siren-like precision which soars across the burning guitar rhythms like a stoned eagle. Listening to Nicko McBrain babble can grow a little tiresome as he's always shifting his voice around in parody of the various people and places of his band's history, but if you can get past this, the 10 minutes of monologue is slightly informative...I just wish he wouldn't sing out the band's songs. Ever.

If you're going to piss money on something you possibly already own, this could be the way to do it. Granted, a simple compilation of the band's singles (even if just for the B-sides) would have been sufficed and created less waste in the end, but why take someone for a 10 or 20-spot when you could take them for nearly a dozen 10-spots? The covers are good enough that a Maiden fan should acquire this on the dirt cheap, but I can't in good faith recommend paying top bill for this, unless you're planning on a re-sale of the entire set.