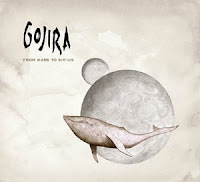 For their third act, the French mod metal squad Gojira aspired to make a mountain out of a molehill. From Mars to Sirius goes beyond aspiration to accomplishment, quashing their previous efforts like a landslide, so hard that rubble continues to pour onto The Link's face long past the original, explosive tremors. This is a dense and effective offering which transformed a band that was a mere curiosity into a massive, touring force and one that many journalists and hipsters acclaim to be 'the future of metal'. We've heard this expression before and it almost always peters out in the end, but one cannot deny the increasing success experienced by this band.

And it's just impossible to deny. By the end of the first track, "Ocean Planet", the band has already crushed all of their prior songwriting. Bold, accessible and yet dusted in flecks of industrial rust and grime, the track functions off an alternating discordant groove akin to something Voivod might have crafted on their Negatron album (in particular the breakdown at 2:00), but blocky, mechanical and uniquely graceful. It's like a chunk of factory gaining sentience and operating itself, yet adorned in the bands pseudo-universal 'life peace love Earth' sentimentality. "Backbone" constructs an appropriate chug which reminded me of the rhythm to Primus' "Toys Go Winding Down", albeit glazed in industrial rock and Joe Duplantier's carnal multi-faceted throating. The song experiences a beautiful shift towards sombering melodic death metal at its own 2:00 mark, immediately an album favorite. "From the Sky" continues this trend with a barrage of fundamental grooving death metal and chugging fortitude, both barrels rolling forward towards a beautiful climax. "Unicorn" is another of the band's frequent interludes, this one's shining harmonics and tranquil beat winning out over the namesake.

This flight into deceptive fantasy continues with "Where Dragons Dwell", a winding passage of bass floes and chugging excess at the end of its cavernous melodies. The ambient break is very cool, transforming into another huge bottom end riff, which leads the track through its final pacing before "The Heaviest Matter of the Universe" explodes like a galactic genesis, which a flattening groove which will have you either twitching and banging your head like a goddamn automaton or throwing your hat in about how horrible this band must be for its ability to create such a convincing, simplistic slaughter. "Flying Whales" features whale song samples and melancholic clean guitars that slowly propel into another stompfest, and you can almost close your eyes to imagine the travails of such a figurative beast as it navigates the phlogiston between worlds and realities. "In the Wilderness" follows with more desolate crunching barbarity, as if the 'wilderness' of the title were in fact a post-apocalyptic scene, retired metal hulls stretching the horizon as we celebrate the waste of our passing.

Trees so strong, that they never can fall
Four suns alight, in silver grey sky
Wild river flows, with rage alive
Lions of fire approach me

Such stark and baleful imagery translates entirely too well into the plodding, slugging murder fest of the bands rhythmic guts, ever rising forth from the primordial elixir with a strong melodic surge that balances them back to the more accessible, impatient ear. From here, the crawling cosmic blues of "World to Come", and the brief, distant, half-titled prog piece "From Mars", which feels like a bit of Floyd-ian paving across the band's crushing path, offering a respite before the melee that is "To Sirius", a sequence of colossal grooves against the black border of interspace. "Global Warming" returns the band to its love for the guitar tapped rhythm, a slight sliver of foreshadowing towards the album that would follow this. The track is lovely, even as it digresses into another of the bands lumbering juggernaut riffs, and a gentle end.

From Mars to Sirius is one of those albums with the transient ability to 'grow'. As easily accessed as it was upon release, I have found the years nothing but kind to its wiles, and I rank this now far higher than I ever would have in 2005. A beautiful, winged thing has emerged from its larval stage within the creative cortex of these four Frenchmen, and we are all the richer for its presence, trailing stardust and inspiration upon the potential found in the cauled corners of our beloved medium. Like the massive waves swelling across Tokyo Bay, Gojira has finally arrived.

Highlights: Both the liftoff and the landing.

I thought it was a military helmet before