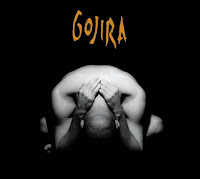 With its rather unassuming cover art (I like to refer to it as 'The Nose'...look closely), the debut of French Gojira might give the impression that it was any of a million typical alt rock or alt metal albums released by countless forgettable bands in the 90s. But the music contained within Terra Incognita, 14 tracks, half of which are culled from the band's Saturate and Wisdom Comes demos (1999-2000), is often not a great distance from their more recent material ala The Way of All Flesh. Combining accessible, mechanical grooves into the field of more intense death metal is not a trait often welcomed within the genre, and to be sure, Gojira have their lovers and haters like any other band that sticks their neck out and begs to be just a little different.

Terra Incognita might be the band's first and worst effort, but that's saying a lot for the French band. Even on this formative release, which occasionally lacks the distinctness of its younger siblings, there are still a few good songs and ideas. With a sound culled from influences like Meshuggah, Sepultura, Carcass, Kong, Machine Head, and perhaps a little Prong, the band has a lot of modern, arguably nu-metal mosh to them that can often distract from their heightened sense of riffing, but occasionally even these LCD grooves can stun the listener straight into submission with their effortless precision. Although the band's musical skills were already well honed by this point, I am not a major fan of Joe Duplantier's vocals on many of the tracks, which feel like a rather ho-hum mesh of grunts and snarling, like a modern Carcass with little visceral splash.

"Clone" showcases the band's love for tapping rhythms, something they continue to this day (on a number of Way of All Flesh tracks), and this is sadly the most interesting riff of the song. The rest of the track consists of big, mid-period Sepultura-like mosh/thrash, rolling double bass and not much in the way of a hook, not even the Prong-like riff at 2:00 with the squeal is enticing. They lead off "Lizard Skin" with a decent droning guitar rhythm, then break for a more mathematical chug-off akin to Meshuggah. "Satan is a Lawyer" introduces goofy, clean vocals over lightly distorted, almost funk-rock guitar rhythms, all of which are rather garbage until the band busts out the speed-picked neo-thrash rhythm at around 2:40. "04" is an interlude piece with more tapping mayhem, while "Blow Me Away You (niverse)" lurches with some sagging groove rhythms but finally picks up a little near the end.

I'm not a huge fan of that entire chunk of album, but after comes fascinating second interlude, " 5988 Trillions De Tonnes" formed of ambient swells and raggedy tribal percussion, which precedes "Deliverance", which opens with some thrash-u-puncture and grating and groove-laden death. "Space Time" is one of the strongest tracks on the album, with strong and curious drumming courtesy of Mario Duplantier, and Joe using his more identifiable, hoarse, angsty vocals. "On the B.O.T.A." emits some nutty tapping and a fusion-funk atmosphere, while "Rise" has an incredibly dense and sick verse rhythm, among some less interesting, chug chunks and then transforms back into the natural 'rain forest' percussive interlude of "5988 Trillions...".

The final stretch of Terra Incognito begins with the thunderous, low-end churn of "Fire is Everything", which devolves into a dull, minimal chug-a-long before taking the high road with a nice vocal/groove segment, only then to fall once more into another, sluggish, not very interesting riff that crashes into the closing patter of electronic rain. "Love" builds a rolling artillery in the verse, then crashing around your mind with some atmosphere before it erupts into a very Meshuggah breakdown interspersed with great percussive strikes. "1990 Quatrillions de Tonnes" uses somber, cleaner guitars and samples of vocal torment along a steady rock beat, like a river winding into Pandemonium and picking up echoes of the insanity beyond. The 'closer' to the album, "In the Forest" is another of its best tracks, building a feel reminiscent of the Dutch band Kong before the vocals, and then some very forceful palm muted rhythms that chug into the silence beyond...until a hidden instrumental track pops up for a brief spell.

I was not a huge fan of this album at the time, and even listening back to it today, it feels dated and more than a little sterile. They were merely a curiosity in 2000, another band that dared walk the ground of a Prong or Meshuggah but with less interesting songs than the former and little of the machine-like hostility of the latter (i.e. an album like Chaosphere). Since the band have taken off, being booked on huge tours and profiting from a large degree of buzz, they've matured considerably. For that reason, I'd suggest any of their later full-length offerings above this, and delegate Terra Incognita to those fans who want to listen to the band's 'demo' phase, where the soil was fertile with a crop of dynamic intentions, but the early harvest was simply not the best of eats.

Highlights: Space Time, In the Forest