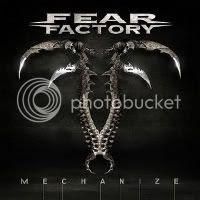 Activating with swirling synthetics and clunking samples, the opening title track to Fear Factory's Mechanize comes out swinging like drunken motherfucker who was awakened by a slap in the face (An apt analogy for Fear Factory's career as a whole, I'd like to think). Coming off the drab Digimortal and Transgression albums, as well as the just-sorta-decent Archetype, a re-energized Burton Bell bellows out “We've become mechanized”... and damn son, it shows.
The 'comeback' album has become all the rage in recent years for the old warhorses of metal. Metallica, Megadeth, and Machine Head, just to list a few, have made attempts to bring it back. Add Fear Factory to that list. Mechanize eschews the jumpdafuckup aesthetics of the last decade of material and instead focuses squarely on the elements of the music that made this industrial/death band the trailblazers that they were: The industrial and, especially, the death metal. Mechanize reeks of tremolo, ethereal webs of samples, blast beats, and tasty down tuned grooves. This is more than likely the result of three factors: Dino Cazares returning after some time with the techy Divine Heresy, the return of Rhys Fulber on synths, and the entrance of Gene Fuckin' Holgan. The result is, by far, their heaviest album.
While “Mechanize” serves as a decent opening, it's also the weakest track. The song just never seems to completely blossom despite it stupidly attempting to be heavy. Its an over-extended intro that could've probably been cut at the first pre-chorus and been more effective. Don't believe me? Try it. Wait until about 1:44 and then skip to “Industrial Discipline”. I'll wait.
Kickass, eh?
Speaking of “Industrial Discipline”...
The second track is where the album truly gets its shit together. Soaring choruses, motorized double bass, chugging, piston-pumping riffage, and an unabashed use of big, full chords really make this track a standout. Sadly, “Fear Campaign” can't sustain the power and there's a definite decline despite the blastbeat opening. “Fear Campaign” seems to fall prey to the same faults as “Mechanize” trying to adhere to the new Fear Factory feel and as a result it feels forced. There's also a huge what-the-fuck moment when a guitar solo rips out. Thankfully, like someone who yells out something embarrassing right when everyone around them stops talking, the “solo” is never heard from again for the duration.
From track four, “Powershifter”, and on, this album slays. The amazing close of the brooding slow-burner “Oxidizer”. The pinpoint accurate start-stop of “Christploitation”. The atmospheric and deliberately paced evil of “Designing the Enemy”. The hard-driving, full throttle bluntness of “Controlled Demolition”. All up to the endcap of the album, the wrenching “Final Exit”, all of the cold, angled digital chaos we've been wanting from Fear Factory since Obsolete is present, accounted for, and exceptional. The B-movie sci-fi post-apocalyptic themes of sentient technology, paranoia, and distrust of the powers-that-be are here in full force, for better or worse.
So, what's the verdict on Mechanize?
With the obligatory “If you're a fan” statement already known to be a “yes”, then we'll get straight to the meat of the issue: It's good. It's damn good. If Obsolete was your FF album of choice, then it's the strongest since Obsolete. If Demanufacture is your favorite, then it's the best since Demanufacture. If Soul of a New Machine is your favorite, then... well, you need to wake up and smell the mechanical rose-bots, as that album has not aged well at all. An argument could be made in favor of Mechanize being their best album to date. For the record, I'm completely behind that argument. Mechanize is their most engaging, best written, and heaviest offering. It's a shame that it was written two decades into this bands career, and as such will never be as influential or as relevant as their first three releases. Too many other bands have taken cues from Demanufacture over the years and run with them. Even so, it deserves a spot at the top for this influential band who simply took a turn for the worst... for ten years.
Despite not having fifty percent of the founding members (And judging from drummer Raymond Herrera and string slinger Christian Olde Wolbers current work in Arkaea, this is a good thing), Fear Factory have been rekindled and revived, dead weight cut away, the dust and cobwebs brushed off, and diesel-engine madness RPM's in the red. It's been stated by Burton C. Bell that the purpose of Fear Factory was to be a thing of steel: Perfunctory, driven by a single purpose, mechanical, not human. And while some may state that a follow-up to Demanufacture (or Obsolete) was never accomplished with their previous outings, I can easily and unequivocally state that, despite two missteps early on, it has been accomplished here.
(Note: “Christploitation” is a stupid fucking song name. It sounds like a Dethklok song title. Think “Bloodrocution” and “Hatredcopter”.)
Verdict: Epic Win [9.5/10]
www.myspace.com/fearfactory
Posted by Rock at 11:06 PM