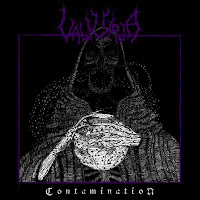 Contamination is the sophomore effort from Sweden's Valkyrja, a band featuring J. Wallgren and S.W. of countrymen Ondskapt, but with a somewhat more accessible sound. When the band breaks out their faster material, I am reminded of both Dark Funeral and Marduk, perhaps a little of the more recent Immortal, but they are also drawn to somber passages in which the guitars breathe out and the bass rolls along. In fact, Valkyrja are a pretty moody and atmospheric band, but they accomplish this primarily through the standard instrumentation, with only a few few ambient segues spread about the album. Though Contamination is not exactly a riff fest, it is the overall strength of the tone and interaction between the harsh, biting vocals and the shining glint of the savage chords that serves as its strength.

A brief and resonant "Advent..." intro breeds a soft if turbulent ambiance which is then shattered by "Oceans to Dust", like an icebreaker forging its way through a glacier. The opening riff here seems pretty standard Swedish black fare, and the vocals of A.L. have a menace that is part Abbath and part Cronos, but deep and resounding across the crisp hiss of the guitar tone. Though the album has some pretty fast material like "Welcoming Worms" or "A Cursed Seed in the World", this is a band who excel far more when they capture their drawn out moments ala "Ambience of the Dead", or "The Womb of Disease", which gradually accelerates into the band's venomous propulsion. But perhaps the track that stood out to me most here was "Laments of the Destroyed", its mid paced thunder reminiscent of a Bathory or Darkthrone, sans the truly raw atmosphere of older albums. I'm not too into the bridge rhythm with its rather average Swedish sound and lack of truly engrossing notes, but that's pretty much the case with most tracks here...they'll build a few moments of grace, but feel as if they've walk along a too trodden path with few distinct characteristics.

Still, the album sounds huge, and a deal with Metal Blade Records is likely to stir up some buzz for Valkyrja, especially with a slightly more mainstream crop of fans that have a rabid taste for bigger budget, reasonably composed black metal and don't delve too far into the obscure sounds of the members' other band Ondskapt and beyond. Contamination is a decent effort, it will sound towering as it blares forth from your speakers, but it's simply not something I will remember tomorrow or next week.

Highlights: Laments of the Destroyed, The Womb of Disease