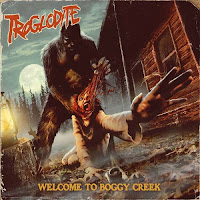 Missouri's Troglodyte has an admittedly cool, campy gimmick going for it that should open a few doors to exposure, but unfortunately that is where their distinction begins and ends. Adorned in rubbery masks that give off the impression of a band of murderous neolithic brutes, a prehistoric alternative to Slipknot or Gwar, they have decided to fixate their lyrical concepts upon the cryptozoological myths and legends of primitive manlike primates: yeti, sasquatch, abominable snowmen, Bigfoot, whatever the fuck you want to call them. The vehicle of choice? Why, brutal death metal of course, with equal parts slam and competent acceleration that never quite stand to memory quite as much as they stand to leave knuckle imprints upon your face.

The old horror paperback (or film poster) cover art is quite cool, as well as the potential here for a focused concept album, but Welcome to Boggy Creek squanders much of its advantage by not playing it seriously enough. The debut is just too tongue in cheek, with songs like "Skunk Ape Rape: The Rapture" and "The Only Good Hippie...is a Dead Hippie", or "Hit By the Hendersons". A Harry and the Hendersons tribute! Less direct silliness would have actually worked in its favor and made the album that much more humorous and compelling. I mean, the band had me at the cover and title, but the music itself all plays out like just another USDM record with aims that have been pre-defined by bands like Deicide and Suffocation. More of the former, as the layered guttural and snarl vocals are highly redolent of Glen Benton, and a lot of the riffs move along the same bludgeoning axis as those composed by the Hoffman brothers in the 90s, but in their defense, Troglodyte is not necessarily a derivative of any one band.

In fact, the musicianship is quite competent, with intense if predictable drumming that can accelerate to maddening speeds, and obvious skill between the guitarists, who can rifle out elegant leads ("Beaten and Eaten") and unexpected atmospheric passages (as in the bridge of "Bring Me the Head of Bigfoot") amidst the less surprising slamming grooves and blast beats. The band is versed in variation, no two tracks sound precisely the same, and the short length of the debut (under 30 minutes) ensures that its unlikely to bore anyone to tears, but with such a primitive and hilarious aesthetic I was left wanting more. Welcome to Boggy Creek isn't half bad as an establishing shot. The production is on par with much of the modern, brutal death we've been hearing the past few years. The riffs, while never memorable, are inoffensive and vaguely exciting. The visuals seem like they could be a lot of fun, and the aptitude of the individual band members is unquestionable. I'm down for some neander-core...I'd just like to hear them write more effective music that isn't so quickly lost in the super-saturated environs of this genre.