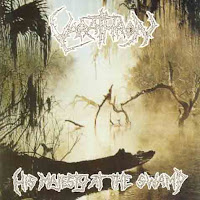 It might come as somewhat of a surprise that I find Varathron's full length debut to be a disappointment. Not that it's a bad album, per se, because in fact, His Majesty at the Swamp is pretty damn good. The letdown stems from the fact that where the band showed such a distinction from their Greek peers on the One Step Beyond Dreams EP, this album is more or less barking up the same trees as the better known Rotting Christ on their Passage to Arcturo and Thy Mighty Contract albums: generally slow, plodding black metal with straight thrash or heavy metal rhythms tucked into a grim vocal atmosphere, backing synthesizers and other cheesy effects used to give it that unquestionably Greek environment.

There are some marginally faster passages scattered through this album, but the skin shredding, pick me up thrash/black of "Genesis of Apocryphal Desires" is entirely absent. Considering the close relationship Varathron have with their brother band, it's not so stunning. Even here, there remains some crossover, with bassist Jim Mutilator serving in both (though Themis Tolis, who performed on the EP, has been replaced here by 'Wolfen', who may or may not be the same person for all I know). So forgive me if I consider this to be a companion piece to Thy Mighty Contract: aside from Necroabyssious' broader, more bloodied vocal presence, that is precisely what it is. Even the composition of the guitars begs a comparison. The late, accelerated melodic picking in "Lustful Father" is similar to what Rotting Christ would mutate and recycle for years (it's even written by Sakis Tolis himself); while the slower, doom-driven pieces like "Unholy Funeral" and "Son of the Moon (Act III)" are also highly redolent of their kin, not to mention the parched production.

That being said, I still really dig the atmosphere here. The synthesizer and whisper-strewn title track intro is admittedly pretty freaky, while the songs are suitably dark and dreary. A few of the riffs in "Nightly Kingdoms" and "The Tressrissing of Nyariathoth" show a slight Celtic Frost inspiration, with tiny grooves amidst their loosely thrashing gait. The fact that the tracks were recorded in three separate spans of time does have an effect on the album's consistency, and the varied sounds do tend to jerk the listener out of the experience, but the composition itself is level throughout. If I had to pick a favorite it would be "Flowers of My Youth", which is perhaps the closest in pace and atmosphere to the previous EP, at least the slower sequences there in "Descent of a Prophetic Vision". However, the album in its entirety is reasonably cool if you're into the primitive, old-school sound from this country.

Rotting Christ, Necromantia, Nergal, Zemial, Thou Art Lord, and Varathron: they all seem to creep along at their own stride, mindless of the ripping, rasping velocity being spun out of the rest of Europe. His Majesty at the Swamp takes its time drawing you in, but it inevitably gets there, assuming the listener's affections are not so easily broken by the crude production values here. I can't say I enjoyed the songwriting quite so much as Thy Mighty Contract in the long term, but you can very easily get lost in this if you're seeking a parallel. The memorable artwork and grimy sound engineering only add to the flavor, that of frosted moors and mist shrouded sadness and revenge.