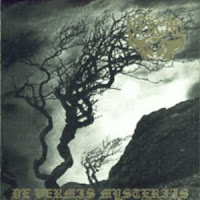 Nergal was another Greek band to join the ranks of Varathron, Septic Flesh, Rotting Christ and so forth by releasing an EP well ahead of any full-length endeavors, but the sound they were going for draws a full-on comparison to to Necromantia (or the earlier works of Finnish outfit Barathrum). This is due to the use of the distorted bass as the central instrument in their grim configuration, plotted alongside the keyboards, tinny and under-produced drums and monstrous rasp vocals. It's almost as if the band were conjuring a raw, punkish black sludge here, but the synthesizers are leaning into a black/Gothic territory; an appealing and fresh sound, no doubt, but unlike Necromantia's Crossing the Fiery Path, for instance, the compositions feel a bit loose.

The bookends to the EP are quite nice, but then they also account for about 50% of the content. The swelling choir intro feels as if it might have been bitten out of a movie or game, but if not, all the power to Nergal. The same might be said for the finale, which is this dreamy and eloquent, yet subtle piano piece, but this feels slightly more original in the context of a black metal disc. Then, similar to Disharmony's EP from the same year, there are a meek two tunes comprising the core of this: the voluptuous and belligerent "In the Name of Nergal" with its banks of four string obsession imbued with martial keyboard passages and solid groove and double bass; and "In Glass of Sin", which is slightly less aggressive, almost like they were concocting a mellower, barbaric hymn with moodier bass lines and organs for a cryptic mood, at least until the song opens up with more of the sludgy momentum.

De Vermis Mysteriis is a fairly meager ration, I can't argue that, but there's just something about it which does feel unhinged. As if the convocation of cheesy synth lines and rugged, go with what you have attitude at some point collide into an authentic clamor. The vocals are pretty harsh, more akin to Zemial than Rotting Christ, and the compositions crude, but the atmosphere created is resilient and possibly worth checking out if you're into the formative works of their countrymen. Just don't expect a miracle.