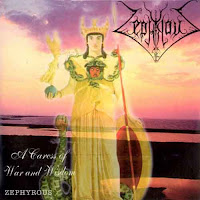 Zephyrous were another of those incredibly low-profile Greek black metal acts of the 90s that would remain entirely invisible if you didn't know exactly what you were looking for. They released a split with the equally obscure Vorphalack several years before this (1995), and most of what we find on A Caress of War and Wisdom is simply derived from that release, with one more track added. I'm not sure if it's completely intentional (an interview I've read online seems to point to 'yes'), but these guys played a crude brand of symphonic black metal in which the keyboards are so prominent and the guitar tones so unusual that they almost feel like they're trying to channel pure 80s progressive rock into an arcane and malevolent nightmare.

It might just be the actual levels. The thick and plunking bass lines are right on par with the fuzzy little guitar lines, and the band implements all manner of synthesizers, from jazzier organ tones to higher string tones. The drums are programmed, or at least do a good job of emulating a machine, and the vocals are largely composed of uncouth snarling and a few, spoken Goth parts. The best though is when they go all out proggy and cheesy, like the intro of "The Serpent Race" which feels like Vangelis and The Mars Volta jamming with a black metal singer. Frenetic and unique, this is barely even a metal track at all aside of the vocals! "Dreamers" and the non-split track "Dysangelium" are both keyboard pieces, the former quite charming, and the 7 minute "Entrance and Wandering on the Seven Zones" is perhaps the grimmest thing here, and the closest to pure black metal due the heavier guitars, but it's still thick with synthesizer.

The first impulse is to assume that Zephyrous, pretty new to the genre when the Vorphalack split was released, had little idea of where they wanted to go with their material, so they just mashed together a bunch of seemingly random elements and came up with a distinct hybrid almost by accident. But it damn well might be what they intended all along, and if so, kudos to them. Not that A Caress of War and Wisdom is exactly revelatory: the clean vocals pretty much blow, the mix is incredibly crude (basically a demo), and the percussion flimsy at best. But it does possess an unusual appeal to it which, molded and produced through a better budget recording, with superior vocals, would not have been unwelcome in an age where many of the striplings in the black metal field were beginning to sound all too much like their parent trees. Scattershot and strange, perhaps, but that's exactly why I don't hate this.