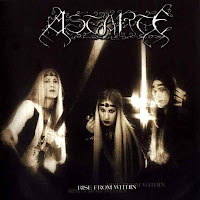 I'm not exactly sure why it's taken me so long to come around to the sounds of these Greek sirens, but their first few albums seemed so irrevocably bland when there were so many superior options blowing around Europe in the 90s. Like the debut, Doomed Dark Years, Rise Form Within is a rather well executed album. This is not simply a trio of extremely attractive women, here. It's not a gimmick. They actually perform their material with some degree of professionalism, and their production standards and musicianship could put a lot of their peers to shame. Where they seemed to fall short on these first few outings is just in crafting the memorable, even hymns that resonate long beyond the confines of the listening experience. At its best, Rise From Within only ever feels 'sufficient', never sadistic, sinister or salacious like a number of its obvious Scandinavian influences.

The first track, "Furious Animosity", is one of those instrumentals that probably could have used vocals. It's not atmospheric enough to strike out on its own, and the variation between the straight, charging chord streams and the slower breakdowns with the keys is simply not that compelling. Once they hit the "Rise From Within" tracks, though, they're right back where they left off on Doomed Dark Years. Mid-paced, soaring melodic black metal, with solid, pronounced bass lines, spacious breaks with march-like drums, and keyboards on and off where they felt they'd feel more majestic. Bands like Emperor and Dissection are strong reference points, though the band is not quite so manic and mighty as the first, nor as melodically strong as the second. There are a few decent tunes, like the graceful charge of "Naked Hands" or the Gothic piano inaugurated "Liquid Myth", but beyond producing a wall of sound that seems pleasing and inoffensive to listen to, there's just nothing worth remembering.

The vocals are full and hoarse, but they tend to grow monotonous throughout, as if it's a strain for her just to perform with this voice, never mind threat it with some diabolic emotion. The guitars often start out with a functional network of chords, but then they just go nowhere. The band is skilled at layering its bass and synths so that they possess their own voices against the six-stringers, but they just sort of bludgeon along and harmonize without any intricacy. All this aside, Rise From Within is not a bad album (they've never recorded one to my knowledge), it's just another middle of the pack European black metal disc which safely dwells within the shadows of its predecessors, without stimulating the listener. It seems strangely more subdued than the debut, laconic despite Psychoslaughter's solid drumming. I suppose I'm in the minority that actually prefers their mid-period work to anything else, but not by a large margin.