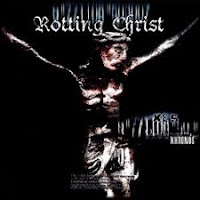 After the curiously 'chill' Sleep of the Angels, which wrought its emotional power from simpler, more accessible riffing patterns and the substitution of Gothic metal atmospherics for some of the straight and sad majesties of its predecessors, speculation was high as to whether Rotting Christ would move further into a more congenial, radio friendly space, or regress back into their carnal and defining origins. Well, Khronos does neither. It sort of sidesteps the band into another new terrain. The springy, full-bodied but lightly distorted guitars of Sleep of the Angels have been supplanted with a thinner tone, and where the keyboards there were bright and prominent, here they seem more subdued and breezy, lush and ambient, often mingling with other environmental effects at the very edge of the listener's attention.

The centerpiece of the album, sadly, is not a Rotting Christ original, but a cover of Current 93's "Lucifer Over London", which they've lent a restrained magnificence through the melodic idylls of the guitar, searing background chords and the synthesizer fauna. Sakis Tolis does get a little repetitive with his rasping, a characteristic limited not only to this song, but in total it's one of those covers you'll remember and turn to nearly as much as the original. Otherwise, I favor "Aeternatus", with its sensual, whispering vixen samples and acceleration from muted rock pace to an all out, old school Greek charge through the enemy defenses. "Law of the Serpent" is a poignant, seething instrumental track with more depth than it has any right to, and the chorus melody of "Fateless" is unflinchingly pretty, and the haunting background ambiance is brilliantly handled there. "Time Stands Still" and "If It Ends Tomorrow" are likewise excellent songs which draw a closer comparison to the Triarchy of the Lost Lovers era.

The production is quite rich, especially the synthesizers, but for some reason I felt it to be more processed and less distinct than Sleep of the Angels. The band moved from Xytras (on the past two albums) over to Abyss Studio in Sweden, so that might explain some of the difference, but in particular the guitars here just don't gleam nearly so much as the last album. A minor gripe, surely, and Rotting Christ easily distract away from it with the strength of the music itself, and ultimately Khronos is another jewel in what by this point was already a gem-studded scepter. One of the few bands that ever managed to mix its broader influences (Gothic, industrial, trad metal and classical) into its unique brand of black metal without somehow alienating its fanbase and causing an underground uproar. Granted, the Greeks were never quite at the visibility level of Emperor, Dimmu Borgir, Cradle of Filth or other raving successes, rather a more soft spoken alternative, and Khronos once again captured this career eloquence with its intelligent, thoughtful lyrics and diverse palette of dark and light sounds.