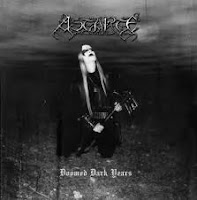 Astarte may or may not have technically been the first 'all-female' black metal act (quotes because the session drummer here was a dude), but they were certainly the first that made any waves, the premiere and reigning Amazons of the Greek scene. That said, the novelty pretty much begins and ends there, because there is nothing explicitly effeminate about Doomed Dark Years, a seasoned and atmospheric debut which frankly does not FEEL like a debut, but hits a few snares along its route in terms of the memorability of its actual songwriting, and its enduring impact (or lack thereof) when placed against any of its Scandinavian predecessors. For here, at least, the harpies have only a passing semblance to their Greek peers.

Doomed Dark Years begins with an spooky, shining prelude of wolves howling and horror attuned keyboards ("Passage to Eternity") before the first true sampling of their black beauty, "Voyage to Eternal Life". This piece alternates between surges of standard riffing and rasps, and the more tortured segues of eloquence in which clean guitars are affixed to the backing chords. Synthesizers are constantly being used to manifest the grandeur of an ancient landscape, and the track reminds me very much of Emperor's In the Nightside Eclipse, though they lack that feverish, diabolical demesne which lurked in the rafters of that masterpiece. Unfortunately, as was often the case in 90s black metal, Astarte don't really know where to quit. They swell their compositions up to lengths that are often 7 or more, and this particular tune ("Voyage to Eternal Life") is over 9 minutes with painfully little to show for it, despite its internal consistency and an admittedly decent production for its day.

The patterns continues into the next piece, "Thorns of Charon - Part I (Astarte's Call)", which has a darker subterfuge in its bleeding streams of melody, and heightened symphonic sequences, but enough to make almost 9 more minutes interest? Negative. Now, not every track on here is quite so open ranged and overgrasping: "Doomed Dark Years" itself is a shorter tune which begins with clean guitars and then explodes into a thundering, moderate blast not unlike what we heard on the previous songs, and the latter "Thorns of Charon" movements ("Emerge from Hades" and "Pathway to Unlight") round out their 7 minute existences with slightly stronger riffing, still reminiscent of Emperor though the keyboard orchestration is never so menacing. But even these, and "Empress of the Shadow Land" have too many moments of repetitious indifference to really stand out unless you're simply seeking a desolate, driving landscape which feeds off its own, middling melancholy.

But it makes for a pretty, penetrating light, at least. The album sounds lush, due to the balance of the guitars and keyboards, and the vocals are harsh as fuck, like a more throaty Ihsahn with only a small disclosure of its originator's gender (if you listen very closely). This debut has come down a lot in estimation for me over the years, becoming marginally less exciting with each listen, and I feel that they've surpassed this several times since. However, Doomed Dark years knows its business, delves into the Greek mythological backdrop that I so often want these bands to explore, and even if the music and lyrics are not ultimately magnificent, it's convincing enough to prove that black metal, like its parent and peer sub-genres, is not solely a man's realm.