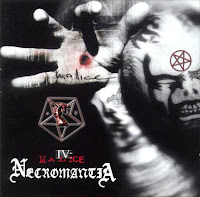 Of the four full-lengths Necromantia has released to date, it is the misleadingly titled IV: Malice (which is their 3rd album, so they must be counting the split with Varathron or one of their EPs in the tally) which is probably the closest to a sheer black metal sound. The band still makes full use of their two bassists, with the distorted 8-string dominant as the guitar substitute, though they're not opposed to a good old 6-stringer for the leads. Most prominently, though, this is a generally fast as fuck album which more closely reflects the typical black metal sounds of Europe, kind of like Barathrum in overdrive. There are still some tinges of atmosphere scattered throughout the pummeling majority, but not enough that it culls the charms of its predecessors Crossing the Fiery Path or Scarlet Evil Witching Black.

To the credit of Magus Wampyr Daoloth and Baron Blood, they try quite a lot more with the bass than they've done on the prior works. Everything from insane, noodling solos to quaint inclusions of familiar classical pieces ("Murder, Magic and Tears") and brooding, pseudo-"Rime of the Ancient Mariner" tributes ("Those Who Never Sleep"). There are also some interesting segues of plucking, muted bass that you don't hear so often in the genre, in particular the bridge of opener "The Blair Witch Cult". Yet these are all exceptions to the rule, and a sizable portion of the CD is spent blasting forward with repetitious patterns, that, aside from the novelty of the 8-string, don't seem entirely different from what numerous other bands were recording. When they do return to their nigh theatrical atmospherics, like the closer "Circle of Burned Doves" and its mourning organ flourishes and tranquil breakdown, it feels quite a lot more like the album I was looking forward to.

Necromantia were always one to take some risks, but here the risks don't necessarily pan out into incredibly memorable material. Half of the fun of the band was just how much they'd merge camp with eclectic evil, an aesthetic hard to pull off without losing the audience. They seem to have traded in some of that personality for aggression. The lyrics seem a lot less interesting (with one or two exceptions), and the accelerated riffing does little but prove that a traditional electric guitar is hardly necessary to achieve this repulsive tone. That said, IV: Malice is incredibly tight in terms of the performances, and the production is far more professional and consistent than any of their earlier albums. The basses sound incredible, often indistinguishable from a rhythm guitar, and tracks like the plodding "Invictus" and surging titular "Malice" are absorbing enough that you'd want to check this out if you were curious about their sound, but outside of the mix itself, there is just nothing on the first two records or Black Arts Lead to Everlasting Sins.