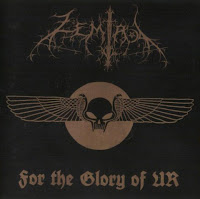 Due to their involvement in other black metal projects like the lauded Agatus, the brothers of Zemial have not exactly made a prolific show of this project. In fact, For the Glory of UR is one of only two full-length releases the band has manifest in well over 20 years of on and off existence, and even though they had struck relatively early with their Sleeping Under Tartarus EP in 1992, they sort of missed the train in the ensuing years, while peers Varathron, Rotting Christ and Necromantia were releasing their most vital albums and broaching an international appeal. Redemption would arrive to some extent with this 1996 debut, but even here the band do not exhibit the typical traits of the Greek scene, and For the Glory of UR has ultimately wallowed in obscurity.

But that's not because it's a bad record. It's simply not all that distinct when compared to what else was happening on the European map. Like Agatus, Zemial bore a predisposition towards the Northern European sound, so you can hear clear traces of Mayhem, Burzum, Bathory and Darkthrone playing out through the black metal tracks. The compositional elements to these tracks are far more simple than Agatus, with a predictable and primitive flow through "The Tears That Wet Gethsemane" or "Gathering Under the Red Moon". However, what I enjoy here is the slight surge of traditional heavy/speed metal you can hear through a number of the tracks, like the fist raging "Battle on the Norse Mountains", or the ripping Bathory tones inherent to "The Scourge of the Kingdom" (taken from the EP), or the bonus track "Nocturnal Witch". Actually, if you've got the edition with the bonus tracks, they even turn in a half-decent rendition of the track "Armageddon" from the self-titled Bathory in 1984.

One distinction between this and the 1992 EP is that the use of keyboards is not so prevalent in most of the metal compositions. They've got a pretty sweet ambient intro "The Blood Unbinds the Dragon" with some cute, synthesized flutes that surge into a dark, brooding pomp, and they also appear once more through the mystique of "Apophis - The Serpent Self", but this time out they've chosen to let most of the guitars tear along without the backing support. This lends the album a little credibility for fans of the total guitar approach, even if the riffs themselves are pretty stripped down. The vocals here are also really nice, channeling a little Varg or Quorthon with the relevant drizzle of malevolence. For the Glory of UR might be your stock black metal record at the middle of the 90s, admittedly all-too-brief and basic, with no subtlety involved whatsoever, and a few redundancies (the track "Sleeping Under Tartarus" is also re-recorded here), but it still sounds sinister and sincere 15 years later.