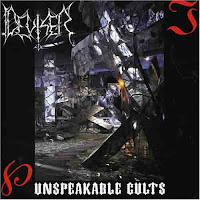 Though their demos and Revelation of Higher Mysteries EP had all the subtle sentimentality of a sawblade, Deviser would develop a more enduring style through the subsequent full-length albums, beginning with the proper debut, Unspeakable Cults in 1996. Here, the band have entirely not lost that belligerent edge, but molded it into a veneer more redolent of their Greek peers Varathron or Rotting Christ, with an increased use of atmospheric keyboards, slower and more potent riffing, multiple rasped and tortured vocals, and even some feminine backups dropped into several of the tracks ("Darkness Incarnate", etc) for an added dimension of elegance and despair.

The focus is still on centric, black/thrashing rhythms and tight, energetic drumming, butt here is a more solemn depth to the writing here than on the previous EP. "Stand & Deliver" teases us with this distant, driving intro before it erupts into a more volatile slew of blacker riffing, and you can immediately hear how this is one of the strongest Greek productions to date, with a vibrant and thick guitar tone and loud vocals somewhere between Varg Vikernes' screaming angst and Sakis Tolis' harsh bite. Several of the tunes are written in a more subdued, almost Gothic metal variation ("Threnody"), while several seem pretty close in feel to Rotting Christ ("Dangers of a Real & Concrete Nature") and would not have been alien to Non Serviam or Triarchy of the Lost Lovers. Two of my favorites are buried pretty deep in the track list, though: the desperate and thundering black metal instrumental "Ritual Orgy", and the tearful and memorable melodic inclinations of "The Fire Burning Bright".

It's not an entirely compelling experience, of course, and once one moves past the rock solid production aesthetics, it seems to dwindle (apart from a few of the tunes I mentioned). For one, the guitar riffs, while structured and competent, are just not always that catchy, fading in and out of attention with little to no means of resonance. I've found myself waiting for that key melody or explosive sequence to arrive, only to be let down. But they've certainly got most of the details correct: the vocals are quite vicious, the lyrics featured a good balance of forceful occult imagery and Gothic grotesque, and the very richness of the studio sound feels like a step forward for Greek black metal in general (following on the heels of Varathron's Walpurgisnacht). If you're into the stronger underground acts of that scene (Rotting Christ, Kawir, etc), then this would be worth checking out, but it was drowned out by the slightly more lethargic, yet unquestionably poignant Triarchy of the Lost Lovers.