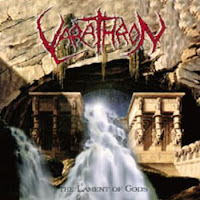 Varathron would close their 90s run out with their most varied and atmospheric work yet, The Lament of Gods, though it would also be their last release for half a decade. At this point in history, it had become pretty clear that the band was not going to see the broader success of countrymen Rotting Christ (and to a lesser extent, Septic Flesh), but alongside the infallible Necromantia, they provided a strong second tier of Hellenic extremity for those with the time and curiosity. The four originals on the EP feature a solid range of roughly mixed guitars, Stefan Necroabyssiou's most brutal vocals (at times even reminding me of Martin van Drunen), and by far the most audacious use of keyboards on any of their recordings, placing both a cheesy charisma and psychedelic spin on the music which occasionally draws a comparison to Tangerine Dream or the Greek-born Vangelis.

"Fire Spell/Forbidden Lust" is an adequately epic opener, with steady, mid-paced riffs drawing back to their His Majesty at the Swamp period, conjoined with trippy, punctual synth lines that ride the verse. It picks up the pace accordingly through the bridge, with glinting keys and a faint but audible clean guitar line over the flowing bass, for a slight progressive rock vibe. "The World Through Ancient Eyes" threads sweeping ascending/descending pianos through sparse yet driving black doom guitar chords, with an effective breakdown in which the pianos move into the lower registers for a convincing, Gothic release. "Beyond the Grave" is also a hugely atmospheric piece, while "Warriors Nightmare" rolls along with a Rotting Christ, majestic gait before it morphs into a desperate charge itself. Lastly, the Greeks offer us their rendition of "Nuns Have No Fun" from Mercyful Fate, complete with Gregorian chanted intro and more of the shiny synthesizers that they used in "Forbidden Lust", which are admittedly corny but fall in line with the spirit of the Mercyful Fate EP original (1982).

It's obvious to note why some would take issue with The Lament of Gods, for the production is rather lo-fi and sounds as if were recorded in a retrofitted bathroom at best. This has not always been a problem personally in appreciating underground black metal works, but I can't help but think that a cleaner alternative with louder guitars would have more impact than what we're given. But you can still hear just about everything, and the loose and progressive spin the band has put on the compositions would have made for a fascinating future direction, though it's not quite what would manifest five years down the stretch in the divisive Crowsreign. Anyhow, if you weren't offended by the rugged engineering behind His Majesty at the Swamp, you could view this EP as its toking, acid-dropping little brother, hallucinating back into the ancient past. A consistent curiosity, if not exactly a Cyclopean effort.