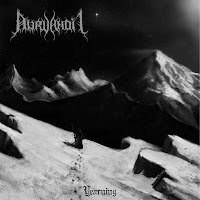 Nothing can cure a summer heatwave quite like a purebred breath of Norse black metal hoarfrost, but in the case of Aurvandil, the rime tinted relief comes from the Upper Normandy region of France. For the past half decade, this has been an active artist with a number of demo recordings and split appearances which ultimately froze over to produce the Ferd EP in 2010, which I both reviewed and enjoyed. So, Yearning is the first actual full-length recording: a 56 minute foray into a wintry landscape devoid of the dregs of civilization, a methodic and meticulous celebration of disgust, and a solitary wanderer's trek to ascertain truth in the solitude of a wasteland; conceived over a span of years, and laid out right in the midst of the entrails of the summer of 2010.

Numerous of Aurvandil's countrymen carve out paths of innovation and progressive through the medium, with varied degrees of success, but this artist could be seen a natural antithesis to such values, predisposed instead to the Norwegian influence of second wave masters Burzum, Darkthrone, Immortal and Enslaved; back in their heydays before they, too, answered the summons of evolution and experimentation. This is not to say that Yearning feels 'generic', or lacks for variation. Aurvandil proves here that there is much journey yet to be had in the basic precepts of black metal. Loads of brooding and apocryphal acoustic sequences fleck the stark, gray and white scenery, not only in their own self-contained compositions like the prelude ("Yearning"), interlude ("Walking") and finale ("Reaching"), but also among the longer pieces, where surges of bleak velocity will oft succumb to calmer passages of reflection, or serve as brief bookends before and after the cold, distorted meats have manifest. Such techniques were also used on the Ferd EP, but I feel that they create a darker climate here.

As for the metal itself, Aurvandil is wise to never let the repetition run completely amok in the composition, a flaw found in many such recordings. Several of these tracks are excessive, with "I Summon Scorn", "Reign of Ice II" and "Gylfi's Journey" all clocking in over 9 minutes in length, and yet they feel a lot more vibrant and dynamic than several from Ferd. "I Summon Scorn" splices its tremulous, churning mid-paced velocity with broader, rock-like passages that draw the listener into ancient, frigid straits and fjords, while "Reign of Ice II" charges forth between segues of tranquil atmosphere and driven desperation. But some of my favorites come earlier on the track list, namely the potent swells of "End of an Age" with its resonant, airy bridge melodies and "A Guide to Northern Scapes", which features several shining, lush guitar lines that explode across its storming undercurrent of struggle and hostility.

Yearning also has a real sense of depth to it due to the distant, grimy vocals and various layers of guitar, not to mention the session drummer who helps place the full-length on a plateau beyond the glacial monotony occasionally gleaned upon Ferd. This is certainly a triumph for what the artists has set forth to achieve, dark as a winter evening, but clearly in awe of the natural, arctic panorama it celebrates, a swath of empty beauty upon which mankind's poisons are but a mere memory. However, I must say that in shorter bursts, the album is not entirely effective. You will want to clear an hour off your schedule to experience this (even more, if you're also interested in the cover of Burzum's "Jesu Død" smuggled in at the end). Give it enough time to roam its eagle haunted heights, snowy shores and heart of ice. Enough to witness your breath and spirit freeze into the forgotten footnotes of eternity.