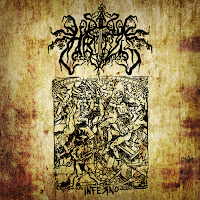 Hot on the heels of his sophomore Anthems to Decrepitude, the one man Spanish Armada known as Hrizg has returned with Inferno, a shorter release which is being dubbed an EP, but very near a full length album in of itself (27 minutes). As I mentioned in my previous review, this is not an artist who prides himself on innovation within the black metal sphere, instead writing in a style very similar to the Scandinavian masters like Bathory, but he also bears the distinction of full fluency in the entire range of core instruments, and it's never less than a wonder how a guy can play drums like this, snarl like a cacodaemon, shred through a barrage of high strung chords and even shift into some subtler strains of melody...

That aside, I can sort of understand why the material on Inferno would be relegated to a shorter form release and not given top billing on the next full-length effort, because half of these tracks are rather forgettable. "Inferno I - The Awakening" is the least impressive, a straight shot of volatile Swedish-styled black at a rapid pace, recalling Bathory, old Marduk and so forth. There is a gleaming bridge nestled deep in the track's structure, but it comes too late to create any real variation. "Inferno II - To Yield Below the Frozen Sky" ranges from the same, blasted exhaustion to a slower, atmospheric elegance, and it seems to be the rule that all of the more mellow fare ("Infernos III and IV - Shadowshield and Ars Goetia") shows a stronger sense for melody, versatility and enduring quality, even if its not enough to pursue this release for.

The closing track, the 8:30 minute "Inferno V - Conqueror of This Wooden Abyss", seemed to carry a more rustic aggression, with a mildly more rugged production, and I found this to be the most resonant and impressive piece on the album, a little more in check with the quality on Anthems to Decrepitude. I enjoyed some of the darker, grimier vocals he spat out over this one, and the thunder-folk finale. But again, it's not so amazing that I'd choose this over either of his full-length records. The production on Inferno is pretty smooth without losing its organic, evil qualities for any over-processed nonsense. All the instruments well balanced (even the bass shines in places), and Hrizg's performance (in particular his drumming) is laudable, but there's simply not all that much to distinguish this from countless other acts in the genre. But he could certainly do a lot worse than this.