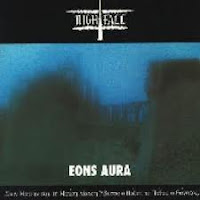 Eons Aura was presumably released to sate the anticipation for the newer, 'cleaner' Nightfall that would arrive through their third full length Athenian Echoes. However, it was out well in advance of that album, and could better be viewed as the 'dying gasp' of the darker, more brooding black/death/doom of the band's sophomore album Macabre Sunsets. A natural bridge from that chunky beast to the inevitable future of studio evolution. The EP features but four tracks, split evenly between covers and originals, but its overall quite solid and had my hopes up for where the band would progress in the mid 90s, a time in which, believe it or not, all manner of bastardizations and transformations were occurring among the base extreme metal genres.

Nightfall is not so successful upon the crossroads as, say, Septic Flesh or Amorphis, but they are certainly a viable alternative, as the foreboding "Eroding" proves with its dire, somber elegance, threaded with efficient leads, synthesized bells and varied gloom and guttural vocals. "Ardour Was I" is more of a straight death/doom that surges into black metal and a martial well of keyboard string-hits and melodic but forgettable rhythms. In all though, these two songs do match up well with anything off the first two albums. Then come the covers, which could not be more different! First, a martial/ambient rendition of a relative obscurity from Swedish dance group Army of Lovers, called "Until the Day Gods Help Us All", and smother it with resonant, guttural vocals for quite the effect. Lastly, they do a manageable impression of Manowar's show stopper "Thor"...with the guttural vocals and added synthesizer cheese you might expect, but it actually gets a good atmosphere going which is comparable to their originals.

Of course, there is just not a lot to this. Eons Aura is over and done with in under 20 minutes, but at least they were spent in moderate enjoyment. Fans who appreciate Macabre Sunsets or the more impressive Athenian Echoes will find it a welcome curiosity, and the two originals here really hit the midway point between those poles, but I was just happy that the band finally got a more reasonable production. In the long run, the covers don't resonate with me, and that does hinder the value. "Thor" is well enough, but how many bands have covered this, and how many do I care about aside from the original? Can't think of any. Nightfall make it natural, and make it their own, but I'd have to favor the Army of Lovers tune, which is far less expected, even if its rather simple in its own right.