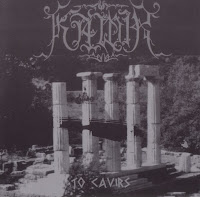 To Cavirs is the first proper full-length from Greece's most pagan black metal entity Kawir, but it did not start out that way. Released the prior year as an EP, the decision was made to tack on about 4 more tracks and give it a more appropriate treatment, which is all for the better, since it stands as my single favorite album from these treacherously obscure heathens. Primitive black metal rhythms dowsed in what some might argue an excess of keyboards and other atmospheric devices, crude and lewd tones broiled in the embittered harshness of the vocals, and most importantly, a direct tribute to the Gods, heroes and fiends that many of us wish all Greek metal bands would prattle on about (as generic as the concept might seem).

Kawir tackles a lot of those obvious characters with this set of songs, including the messenger god "Hermes", the huntress "Artemis", and the tragic "Persefone". Each attempts to musically resonate with its chosen fable, though the results are mixed, and ultimately you might not be able to draw a distinction between most of them. "To Cavirs" itself is the most dominant of the tracks here, a 7 minute sprawl with a bombastic synth intro, female and male narration spread throughout a vortex of thick and thuggish hostility with incredibly simple guitar rhythms. "Nix" is pure acoustic/synthesizer with churlish and almost laughable grim vocals that sound like some necromancer about to hit puberty. "Hecates & Ianos" is a straight black charge adorned with samples of winds and a flute solo in the bridge. "Hymn to Seline" furthers the band's flirtation with flutes, narration and acoustics, supporting them with sparse but effective percussion. Ditto for "Hymn to Zeus", only drop out the voice. "Hermes" and "Daughters of Night" are two of my favorites here, leaden with similar atmospheres as the interludes, but still rocking your face off with the razor edge of the guitars.

It should be said that this is a 'whole package' deal, though. Any attempt to scrutinize or break down the components of To Cavirs might well end in disaster. The guitars aren't forceful enough to run alongside the band's contemporaries, nor are they ever intricately crafted. The flutes and keys seem the sort that you'd use in an episode of Sam Raimi's Xena or Hercules when the main characters were coming upon a hidden shrine or a peaceful village. A stereotype perhaps, of the subject matter at hand. They're cool to have in there, but never exactly all that catchy if you lift them away from the metallic ingredients. The vocals are decent, fixated somewhere between the bark of Rotting Christ and the carnal desperation of Burzum, but not the most capable of delivering the proper level of saturated torment. The production is strong enough, but the bass seems to just teeter along for the most part, never distinguishing itself. All this aside, though, the various pieces of this puzzle come together for an expression that is cheesy, charming, and quite often compelling.