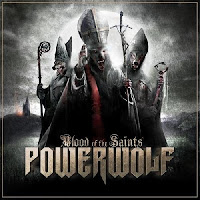 Let's face it, folks, Powerwolf's absurdist nature and reliance on theatrical corpse paint is not about to win them over many new fans among those that take their flower metal seriously. Yet the band has thus far always come through with regards to their songwriting, with three entertaining albums already under their belts, one of which, Lupus Dei, was astoundingly memorable and fun. They've been releasing a new full-length every other year, maintaining a steady rate of production without spreading themselves too thin, so I'm a little sad to say that it appears the Romanian-German act has run full out of steam conceptually, and Blood of the Saints feels like a mere retread over the pack's previous proving grounds.

I was actually pretty stoked for this record when I heard the sample track floating around called "Sanctified by Dynamite" (what a title), but it turns out that's one of the better songs on this album, with a nice escalating verse sequence building into another of those mighty (and silly) chorus parts that ricochets around in your head. The riffing and leads are once again tight; they are solid throughout the entire album, in fact, but very few individually scream out for instant replays, and thus once more the burden is lain upon Attila Dorn, whose high register howling is redolent of a more potent, operatic Ozzy Osbourne, and performs his task with the same faculty as all the previous albums. But there are really no new tricks here. The same pipe organs are used to give same haunted castle impressions, the choruses are beginning to bleed together in the memory, and the lyrics all revolve around the same subjects: vampires, werewolves, the Church, Satan, funerals and so forth. I understand it's 'their thing', but how many 'blood' and 'wolf' anthems are the band going to write? "We Drink Your Blood", "All We Need is Blood", "Son of a Wolf", "Night of the Werewolves". You see what I'm getting at.

That's not to say that Blood of the Saints is bad, because it's not. It plays it completely safe, with the only deviation arriving in the muted rock intro riff to "Night of the Werewolves". The album sounds enormous, polished, and professional, much like any other they've released. Those who want only a mirror reproduction of Lupus Dei or Bible of the Beast will find the fourth opus much to their tastes, but I for one wouldn't mind if Powerwolf waxed a little more creativity into their writing, rather than just repeating themselves to diminishing returns. They already bought me with the tongue-in-cheek horror and blasphemy years ago. Now would be the time for some further development of character and theme. There are some genuinely entertaining songs to be found here, in particular the driving German power metal surges like "Phantom of the Funeral" and "Dead Boys Don't Cry", but ultimately it seems to course along the same old Möbius strip, looping back on itself ad infinitum. They've got the air raid siren front man. They've got the sacrilege. They've got the fangs. They've got the 'image' (love it or hate it). Now break the downward spiral and bite our heads off again. No more scraping by.