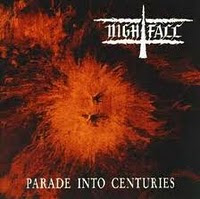 Parade Into Centuries was not only the first full-length for one of the longstanding Greek exports, Nightfall, but also the launch title for French imprint Holy Records, who have released quite a number of high quality albums throughout the past two decades. Nightfall has mutated almost incessantly through the years, originally working in a nexus of black, death, and doom metal before deviating into a more trendy, Gothic metal direction in the later 90s, but I've always found myself more partial to their formative works, in particular this album and its successor Macabre Sunsets. The band was also able to get a full-length together a year or more before peers Rotting Christ and Septic Flesh, so the debut bears mention as one of the first Greek extreme metal long-players.

Parade Into Centuries is a somewhat versatile offering, with a handful of faster paced black, death and thrash aggressors redolent of the late 80s Brazilian scene, contrasted against the more eloquent, Gothic/doom metal touches. "Crying Out the Fear Within" is the best example of the former style, a belligerent storm of predictable but effective speed/thrash riffing tempered in the hoarse, guttural resonance of Efthimis Karadimas, finely spliced leads, and an atmospheric breakdown beneath which the interesting bass lines curve. "The Passage" transfers this feral thrashing into a more ambient context, with a tranquil intro of clean guitar. On the other side of the dynamic range are the doom-spun, melodic "Domestication of Wildness" or the synthesizer infusions of the drudging doom/death piece "For My Soul, When the Dark Falls Into...". This ample degree of variation keeps the candle burning at both ends well throughout the 46 minutes of play length, the only unnecessary piece coming in the 'Longest and Deadliest Version' of "Domestication of Wildness", more or less a bonus track with an additional 2+ minutes tacked on that might have been better off supplanting the core piece.

The production and musicianship here were quite refined for a band with only about a year and a solitary demo under their belts. The guitars are cast in this dry but resonant tone which creates a morbid opacity to the rhythms, while the acoustics feel elegant and the leads, while sparse, are carefully considered. I mentioned the bass earlier, which is glossed with this almost progressive or jazz-inflected tone that feels unique beneath the cleaner passages, but even more so when accompanying the crushing riffs. The vocals did glean a trace of harsh monotony, and many of the rhythm guitars felt familiar even for the early 90s, but in the end there is enough of a journey being created that one might forgive some of its shortcomings for the value of overall escape. Nightfall have hardly been responsible for drafting essential masterworks in their time, but Parade Into Centuries certainly has many of the characteristics to dub it a cult classic, with a clear appeal towards the fans of the Gothic/black hybrids of its day.