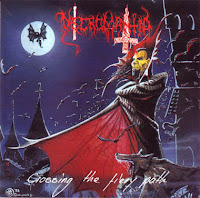 Unconventional and exotic, Athens' Necromantia are not only the most distinct of the classic Greek black metal bands, but one of the hidden treasures in the entire 'second wave' of the genre, if we are to extend that classification to artists outside of its preferred Northern European sphere. Duly atmospheric, to an extent surpassing even peers Septic Flesh or Rotting Christ. Simultaneously refined and lewd, with their fingers upon the pulsing artery of the entire 'cult' aesthetic that so characterizes the black metal pioneer, and yet as the stoic and regal vampire on its cover would imply, fully prepared to sink its fangs into that very same vein and draw sustenance to its own, belabored creativity.

Crossing the Fiery Path does not reach the vibrant, beautiful menace of its successor (Scarlet Evil Witching Black), but its a succulent tribute to horror, and one of the most creepy (if often campy) albums ever produced in the land of the jealous and devious ancients. Conceptually, it treads a path often too broad for itself, and yet the musical content permits naught but vile, life sucking rapture. You've got such a large range of elements, from the hellish chanting intro to "Les Litanies de Satan", to the Gothic piano/synthesizer overture "Tribes of the Moon", to the drawling 13+ minute black/doom epic "The Warlock", that it takes several listens to truly ingest. The use of a second 8-string bass to supplant the traditional guitar gives the album not only a streak of unbridled distinction, but a primitive aesthetic that parallels the pioneering wrath of the great Hellhammer.

The admixture of raw drumming, dueling distorted bass and the malicious rasp of Magus Wampyr Daoloth through "The Warlock", "Lord of the Abyss", or the more rampant rocking of "Unchaining the Wolf (at War)" is memorable and authentic, and the synthesizers are used sparingly to create a haunting efficiency to the ghoulish landscapes the Greeks are extracting. Where other early works in the field from Zemial or Rotting Christ were slightly lacking in their atmospheric reach, Necromantia feels like a fully formed, primal orchestra of morbid terror paradigms, the soundtrack to a series of un-manifest exploitation films set in an idealized Transylvania. From the pompous martial malevolent that inaugurates "The Vampire Lord Speaks", to the funereal immediacy of finale "Tribes of the Moon", the cult-addicted will be almost entirely in the debut's peaks of Gothic foolery and valleys of raw, ripping evil...

I say 'almost', because there is one track that slightly deviates from the blood-sodden path, and that is the "Last Song for Valdezie", a 5 minute bass solo with brief flourishes of ambient choir keyboards. Though its soothing and inoffensive, it does serve to breed some monotony and break up its demonic environs like an unproven ocean liner striking an uncharted ice mass. This is no "(Anesthesia) Pulling Teeth"; it's not used as a brazen indulgence of ability. But neither is it even a shred so catchy as that Cliff Burton piece. Its simply a lull in the carnal festivities. But aside from this, Crossing the Fiery Path is rather amazing in its vision and sincerity. Necromantia loses nothing for its uncanny decision to run with the 8-string throttler over the range of the guitar, and this debut remains both grim and endearing nearly two decades later, the best of Greek black metal until their hell-stoking sophomore arrived, wreathed in plague and perdition.