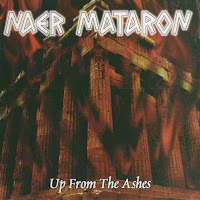 Naer Mataron is not one of the forerunners in the Greek black metal scene, but they were one of the first bands to come along and merge the epic, unique atmosphere of their countrymen with the faster paced black metal of Scandinavia, Up from the Ashes is a strong, storming debut that succeeds in getting them on the map. Even if it's not the most distinguished or memorable, it's pretty well polished, flush with a number of Swedish and Norse albums coming out in this period. A decent mix of near constant keyboards with rampant blasts and sorrow born melodies, a halfway point between Rotting Christ, Emperor or earlier Dimmu Borgir (For All Tid through Enthrone Darkness Triumphant).

This is also a band known for its members being involved in various other groups across Europe. More recent incarnations have involved members of Handful of Hate, Strid, Forgotten Tomb, and Dødheimsgard, but even as early as Up from the Ashes, the roster read like a rogues' gallery of underground Greek heroes like drummer/critic Lethe (Akis Kapranos) who has also done time in Order of the Ebon Hand, Horrified, Septic Flesh, Mournblade or vocalist Aithir Psychoslaughter who has worked with his fair share of obscure acts. Similar to Kawir, the band relies heavily on local mythology from which to derive its lyrics, though the execution itself is much tighter, faster and more vicious. Aithir's vocals are a pretty standard black snarling, but they fit snugly in among the raging melodies and synthesizers; but what I enjoy most about Up from the Ashes is that the band never goes into a tune without a stable riffing pattern in mind.

Where this style could often succumb to mere, unwelcome repetition, Naer Mataron deliver at least semi-inspirational, serpentine guitar lines in the charging "Zephyrous", or "The Silent Kingdom of Hades". They don't play fast to a fault, and there are a few, slower paced pieces redolent of Rotting Christ or Varathron, like "The Great God Pan" (which was released as a demo two years prior to the full-length). Better yet is where they switch between the two poles ("Faethon"), but they also deliver a nice ambient/ritual track ("In En Elusini Mysteria") with percussion, synthesizers and calmer vocal narration. Lastly, the CD reissue of Up from the Ashes includes a cover of Bathory's legendary "Equimanthorn" (Under the Sign of the Black Mark), which is the crudest and most aggressive piece on the album, if admittedly not deviating much from Quorthon's original.

I won't claim the album is wholly compelling, because the riffs are very often hit or miss, and often the lyrics just feel like deity or mythological name-dropping chants. But for what it's worth, the Naer Mataron debut is bound to hold an appeal to those enamored of the 'stock' black metal of the mid 90s, marrying the blasphemous energies of infernal predecessors to a symphonic, atmospheric elegance. Not as exotic and majestic as Triarchy of the Lost Lovers, or as ravening and intense as In the Nightside Eclipse, but somewhere within those bounds. The band would become notably more aggressive as time moved on, but they've always maintained some of these core aesthetics with sound, effective riffing and structure.