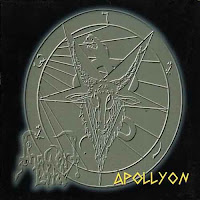 Despite the genius of its creators 'main' bands, I've always remained hesitant to enlist Thou Art Lord into the core of the Greek elite. There has always felt something frivolous and undecided about the songwriting, as if it they merely sought a forum for the cast-off skins of their other projects. That said, Eosforos was off to a pretty good start, and Apollyon makes for a suitable sequel, with a massive improvement in the actual production standards. Yes, Apollyon joins the ranks of Walpurgisnacht, Triarchy of the Lost Lovers and the more obscure Unspeakable Cults at the next plateau of potential, forsaking the murky and dry environment of its predecessor for a polish that could compete with the other bigwigs of Europe.

The issue here, is that there are several songs upon Apollyon that are ridiculously AWESOME, and then others that too soon fall by the wayside. For example, you've got "Experimental Magic" which charges forward, takes no prisoners, sounds adequately harsh, but never goes anywhere; and on the other side, "Hate is Thicker Than Love", with its slashing grooves and muted streams of malevolent bliss, a more belligerent Rotting Christ. Or "Societas Satanas", which boasts a more rugged veneer of melodic black/thrash which might qualify as an almost entirely different band (and a fucking good one). Then there are slower pieces like "Moonscar" and "In Blood We Trust" which reveal a few Celtic Frost tendrils, but little lasting character. The most unusual would probably be the full-on Gothic symphonic sweep of "He, Whom the Gods Hath Feared", but a cursory listen to the previous album tells us that this is no surprise.

The energies are feral, diabolic and vibrant throughout most of the 38 minutes, but ultimately there are just too few songs that stand out in my head. I actually find individual tracks more to my liking than any on Eosforos, but that album as a whole was more consistent. Gothmog sounds fairly brutal and he was clearly one of the better singers or this Greek scene, with a little more meat than Sakis or Magus Wampyr Daoloth, but the riffs are usually hit or miss. That said, the album does hint at this amazing black/thrash side that I would have loved to see Thou Art Lord exploit down the road, because where they let loose they grind you to a pulp. Apollyon is a cool enough sophomore, but it lacks some cohesion.