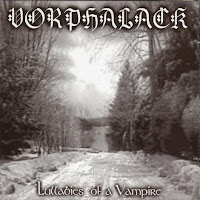 It long enough for Vorphalack to release their first (and to date, sole) full-length album Lullabies of a Vampire, but it was actually recorded during the formative years of the band's immeasurably obscure tenure, in 1995, and simply never saw the light of the day. Not that it matters much, really, because this was clearly not among the more ambitious black metal acts of Greece, and the general mediocrity of their EP releases Under the Sight of Dragon (1993) and In Memory... (1998) were not the sort to breed anticipation. Worst still, the content of this album is little more than a retread of the songs they releases as the In the Sight of Dragon and Black Sorrow for a Dead Brother demos, affixed to their half of the split release with the even stranger Zephyrous in 1995 (which the latter released in 1998 as A Caress of War and Wisdom).

S0, in effect, this is by no means some long awaited bastion of mesmeric and vampiric black metal that would catapult Vorphalack into the ranks of Hellenic contenders, but a wholly underwhelming effort that feels more like a compilation. Several of the band's members, like 'Lady Lilith' (aka Tristressa of Astarte and Minas of On Thorns I Lay) had long since moved on to greater things, rendering this a mere stroll down memory lane. And this is not a paved lane, mind you, but a collection of incredibly lo-fi recordings that alternate between Gothic and pagan flavored keyboard cheese, ambient segues and punchy, primitive black metal which is often more like melodic thrash or doom with rasped vocals. Tunes like "In Search of Glory" and "Lullabies of a Vampire" itself do have a carnal charisma to them, a middle ground between Dimmu Borgir and the King Diamond solo records, with some half-decent riffing involved, but the awful, dry production renders most of their potential power inert.

Also, since the Under the Sight of Dragon tracks are tacked on as a footnote, there is also this inconsistency in the mix that might throw some listeners off. Basically, think of them as nothing more than bonus tracks, because their denser and garbled mess is a lot chunkier than the rest of the material, which is at least level with itself. Otherwise, there is not much to really say or to speak in favor of Vorphalack. They were not good to begin with, and aside from its possible rustic, haunted castle charms, there is no need to recommend this as anything more a crude and unpolished manifestation of a malignant dream. The band seemed to have arrived at some sort of logo here, which they would re-use on their 2004 EP Daemonium Magister, but I actually quite liked the one they had for In Memory... and wish the music would have lived up to its unnerving aesthetic. But no, the music here is substandard to even that crop of tunes in '98.