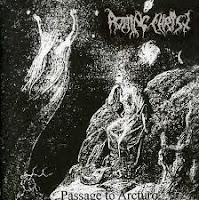 Charting the course of the black metal genre is like plotting the movements of civilization upon a world map. Various climates and ethnic groups, governments and religions, all play their parts in shaping its sound. Few cultures could seem so naturally inclined towards the medium as the Greeks, whose ancient and celebrated history and mythology is ridden with tales of good and evil, pagan adulation and cautionary parables. The jealous acts and trials of the Gods. The fall of Titans. The vast and compelling Underworld. The Odyssey and the Iliad. You just can't beat the source material. And no study in the form could be complete without first examining its progenitors: the foremost (and to date, most successful) of which is known as Rotting Christ.

Formed in 1987, the Tolis brothers evolved their style from a primitive, churning hybrid of death and grind to what most people recognize today as their unique breed of atmospheric black. The starting point for this transition was arguably the Passage to Arcturo EP, which abandoned some of the raw and crushing of their demos (Satanas Tedeum, etc) for a more measured and plodding territory, keyboards and brief ambient passages used to highlight the ritual mysticism of their occult lyrics. This is still a fairly primitive recording, and in fact the production does tend to work against its overall quality, but its all in accordance with the broader vision these gents had set for themselves.

Contrary to their peers to the far North in Scandinavia, this band's musical roots do not always draw upon the expected sources. You're not going to hear a lot of Venom, Bathory, Hellhammer or Mercyful Fate going on here. In fact, the guitars have a lot more in common with the 80s thrash of Metallica, only slowed to a crawl; mutes and melodies conjoined into pendulous, thinly produced rhythms, barely strong enough to support the gruff and lascivious weight of Sakis Tolis' vocals (aka Necromayhem), which pose another distinction from the rasps and howls of Norse pioneers Burzum, Mayhem and Darkthrone. His bark has a lot more in common with the band's death metal roots than Attila Csihar or Varg Vikernes; and this, coupled with the grisly band name, brought a lot of initial frustration into attempts to categorization.

Passage to Arcturo is somewhat enjoyable, and it very clearly sews the roots that the band would later perfect through albums like Thy Mighty Contract and Triarchy of the Lost Lovers. The use of airy, ethereal keyboards against the marchlike step of "The Forest of N'Gai" or the graceful, lamenting guitar melodies of "The Mystical Meeting" lends credence to the band's epic riffing syntax, but they do have a cheesy feel about them certainly dates the album. Themis' (aka Necrosavron) drumming leaves something to be desired, with only the simplest of beats being laid out against admittedly primitive riffs, but in truth its the boxcar production that gimps the beats more than any lack of skill. The bass is interesting, especially "Inside the Eye of Algond" where it trails off merrily against the muted rhythm guitar. But the tone is a bit too plunky.

Really, the entire EP sounds as if it were being played at you straight in a rehearsal room, with the band lacking for the viral energy of their later accomplishments, but this is the worst thing I can say for it. The lyrics are cool, especially "The Old Coffin Spirit", but the riffs are usually hit or miss territory. Once or twice in each of the (longer) metal songs, the guitars and keyboard will flow into something wondrous that sparks the imagination, but this material is not without its weaker, filler segments. The first two full-lengths are hardly shining examples of production, but both are able to develop the ideas here into more tangible tracts of immersion. Passage scrapes by for its nostalgia, and for its important place in the Greeks' inevitable, inescapable pantheon of ideas, but its been surpassed time and time again.