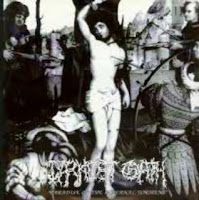 Another of those small-time Greek acts dickering around during the onset of the scene, Darkest Oath practiced a mildly different sound than most of their contemporaries, but they wrote about a half dozen songs in all and then vanished. Two of these tracks are collected on the Paradise of the Infernal Torment EP, released through none other than, you guessed it, Molon Lave records, who can be credited for inundating the niche audience of the day with dozens of short players in varying degrees of quality. Some of those artists turned out to be incredibly resilient and long-lived, while others, including Darkest Oath, disappeared into the ether of imagination, though not without a few points of distinction worth mentioning.

Right away, the keyboards and doomed guitar melody that initiate "Ceremonial Whisper of the Ancient Goat" draw comparisons to other Greek bands like Nightfall, Varathron, Rotting Christ, Zemial and Disharmony, but the music very soon deviates due to the driving, mechanical drums that blast along at about mid pace over some predictable but fuzzy riffing. Much of the time, the keys will follow straight along to create a cheesy harmonizing effect that is mixed quite poorly. But the real standout of Darkest Oath are Necrochrist's vocals (yes, another 'necro-' prefixed bastard from Greece!), which are layered on not unlike Glen Benton of Deicide. However, within the context of Darkest Oath's composition, they stand out all the more, because you don't have the brutal riffing and Asheim drums to chip away at their robust, sinful insinuations. This is very demo level stuff, but I have to say that despite their sheer bulk, I actually sort of dug the demonic appeal.

That said, the music itself is rather too predictable to really pay much attention. Second track "Visions Through My Infernal Dreams" has a decent, frilly lead sequence tucked in the bridge, and Necrochrist keeps the pace pretty relentless throughout the 10 or so minutes, but I found myself either distracted by the vocals or not giving a damn about the overall writing. It earns a few points for not sounding quite like its better known peers, but certainly some of the riffs are redolent of Thy Mighty Contract or His Majesty at the Swamp; it's just the EP's primal, crude production and monotonous, mechanical backbone that differ from those more refined acts. In the end, Paradise of the Infernal Torment is naught more than an unnecessary commodity lost in a continent-sized crowd of superior black metal, but neither is it terrible.