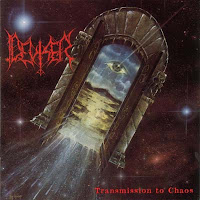 Transmission to Chaos is one of those rare payoffs which make me very happy to invest in such tireless examinations (and reviews) of particular metal scenes, because it's a tasty morsel of greatness to which I had not had the prior privilege of exposure, before the weeks leading up to this project. An unsung and overlooked gem which is likely the band's strongest to date, channeling the atmospheric intent of its predecessor Unspeakable Cults to potent levels of variation which are reminiscent of Deviser's fellow Greek acts without at all being a close impersonation. The riffs themselves are not exactly complicated, and a handful lag behind due to their familiarity and faint predictability, but overall this is a pleasure to experience.

This is first and foremost a black metal record, but the means by which some of the melodic fills and neo-classical leads are threaded through the harsher bombast of the rhythm guitars and vocals often reminds me of both melodeath and even a dash of German power metal. This band came from straight, snarling black/thrash roots, so they're no strangers to building tension and excitement through dynamic shifts, and there's something positively 80s about the way they wend the little, popping melodies through "Sailed by Night", "Satyr, Hail!" and the thundering and beautiful "Deamonolatreia (Forbidden Knowledge)". But they also carve out great swaths of climactic, dreary Gothic atmosphere through the synthesizers in the amazing escalation of "Transcendent Beauty" and the desperate symphonic segues within "Oneiric Aphasia". That said, if you just want straight, charging black metal with good leads and strong riffing, the band also has you covered in "Open Shaft to Lunacy", "The Dark Mood Gathered".

Matt Hnaras sounds a lot more sinister here than on the prior recordings, a bloodied and devious alternative to Sakis Tolis of Rotting Christ if he were distilled into several of the Norse black frontmen like Abbath Doom Occulta or Varg Vikernes. Manos Hiotis does an especial good job of the synthesizers, which breed bombast and dreadful arrogance without ever supplanting the dark and ripping mesh of the rhythm guitar, while the leads are also to be praised. Like many of the Greek peers, the lyrics are fairly thoughtful and heavily image-laden glimpses into the wonder of the natural, the cosmic, and the mystical, and I admire their stark simplicity. This is basically a treasure waiting to happen, and album much untapped by the span of attention often turned into this scene, fashioned through a dichotomy of sweeping eloquence and razor black rigor, and with only minor production issues aside, and a mere handful of riffs that don't match up to the integrity of the remainder, it demands a second chance. Or a first. From everyone.